-->
You are here: MLPH » Ruby » Mastering a Gem: How to Play Mobile Legend’s New Hero Ruby 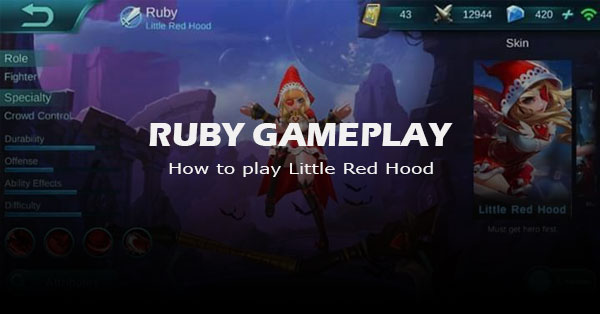 Whether you’ve been playing Mobile Legends for a while now or starting out as a new player on the field, it’s best to keep an eye out on potential Heroes that will make you a strong reliable team player, especially in a fast-paced MOBA game like Mobile Legends (with only almost an average of ten minutes worth for gameplay).

While there has been no official release, there has been an official trailer highlighting Mobile Legend’s upcoming fighter: Ruby. Initially speculated as Support, judging from the released spotlight trailer we can see that this is a damage dealing heroine, with her scythe weapon insanely bigger than her seemingly small frame.

A lot of gamers have speculated that she’ll almost match Alpha’s damage dealing abilities of shooting energy blasts and throwing people at a distance, despite being a closed range melee character. The access to range makes it a dangerous combination with her crowd control abilities, as her ultimate would be like Yun Zhao’s get-over-here Scorpion like ability, pulling people in to deliver heavy blows.

Even if no numbers have been set, she is rumored to have high durability, making her somewhat a tank. Also, her crowd control abilities would be to get in the fray and spin in a circle to throw everyone off and deal big damage.

It would be best in starting with Ruby to stick to the turret early game like many fighters and to get enough levels farming minions and jabbing enemy heroes while turret hugging. Her ultimate would be dangerous for those who dare to even get close, as she’d be able to pull in Heroes in range and deal rather painful damage together with the turret.


Once you’re satisfied with your level, you can go charge after the heroes and square off with them at a close range, confident with this damsel’s durability you can pretty much sick as much damage and paint the lanes red, just like her red riding hood cloak.