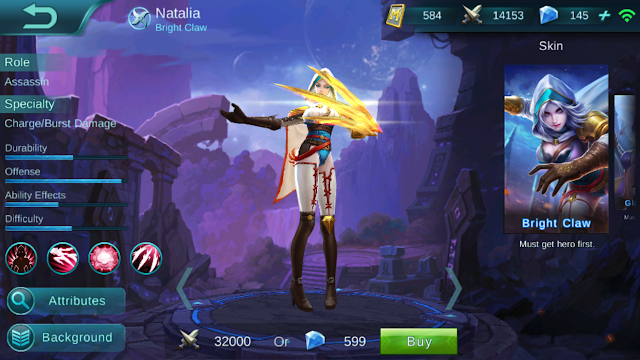 Natalia, the Bright Claw is one of the Assassin class that you need try in Mobile Legends. She also needs a good item build in order to deal a lot of damage.

You can unlock Natalia for 32000 Battle Points or 599 dias/diamonds. Natalia is an offensive hero with 3 skills and one passive. Assassin instinct as her passive, Claw Dash, Smoke Bomb, Flying Tackle and Cold-blooded strangling as her Special skill.

Gains additional HP +800, Magic Resistance +40, Unique Passive-Rebirth: (Resurrects hero after dying and gets HP to 15% and a shield that can absorb damage equal to 40% max HP which lasts for three seconds. Cooldown effect if 180 seconds)


In the latter part of the battle, you can sell this item and replace it with Brute Force Breast plate to add -Hit Points +700, and Armor +40.