New Hero Update Moskov Is A Marksman for 32k BP 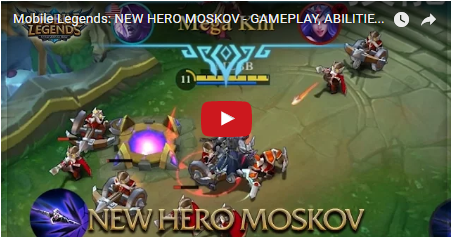 Mobile Legends: NEW HERO MOSKOV Update - GAMEPLAY, ABILITIES, ROLE & COST and detailed information have been release.
According to Ask vell's Youtube, The Mobile Legends New Hero Moskov is a Marksman hero and his abilities are as follows.

Passive ability: Spear of Quiescence Moskov's basic attack can penetrate the targets and deal more damage to enemies behind them. Hitting enemies successfully will reduce the cooldown of Abyss Walker and Spear of Death.

Second skill: Spear of Death Moskov strikes at an enemy hero with full strength, dealing physical damage and knocking back the target. If the airborne target collides with another enemy hero, then both of them will receive physical damage and be stunned. If the target knocks into obstacles, he/she will also be stunned. The enemy that's hit by the skill cannot go in stealth for a short while.

Third skill: Spear of Destruction Moskov throws out the Spear of Destruction after powering up shortly, dealing physical damage to enemies along a straight line. For each enemy it hits, it will provide a buff of increasing attack power to Moskov, stacking up to 5 layers, lasting 5s. Mobile Legends

Moskov is available for 32k  Battle points. and will be released on the next update. For more updates follow Ask Vell Youtube and @mobilelegendsgame.