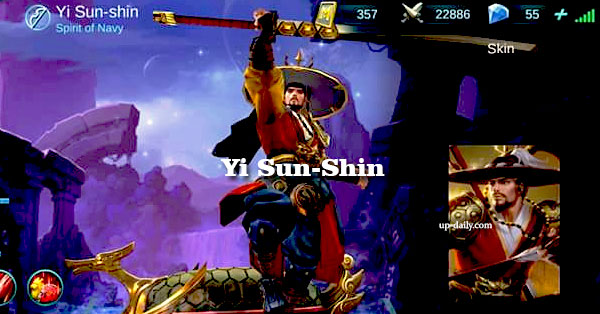 Chungmugong Yi Sun-sin was a famous general in an Asian kingdom. He was extremely loyal and of prowess. At the time when the nation was in danger, Yi Sun-sin built a powerful navy and created the iron armored 'turtle ship', making indelible contribution to Korea Kingdom for dominating around sea areas. 'Wherever iron turtle ships sail on, the sea areas belong to me.' said Yi. Yi was excellent at 'overtaking majority with the minority'. Under the leadership of Him, Korean navy defeated over 330 enemy warships with only 12 ships, gaining the great triumph of Battle of Myeongnyang. To this day, the legend of this Asian general still lives on in the people's hearts.

Heavenly Vow (Passive):
Yi chooses his longbow or glaive to attack according to the distance between him and the target. Using skills or the glaive to attack will impose the bleeding effect on the enemies, injuring them (dealing true damage to moving enemies) and slowing them down. A naval fleet will be summoned to the allied base, increasing 100 pts of HP for the base. The hero can board the turtle ship beside the base periodically and get buffs.

Blood Floods (Skill 2):
Shoots a piercing arrow with full strength, dealing physical damage to enemies. The arrow's attack range will enlarge with the time of powering up. Fully powered-up arrow will impose two layers of bleeding effect on the enemy.

Mountain Shocker (Skill 3):
Orders the naval fleet to launch three-wave attacks of fire arrows. Each wave of attack will deal physical damage. If there are enemy units within the base area, the effect of self-defense will be triggered, strafing forward area of the base with a cloud of arrows.﻿