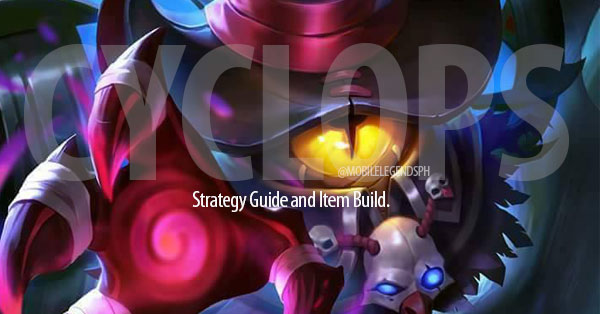 From the last updated patch 1.1.68 comes several upgrades on the Mobile Legends game as well as the newest hero of the game: Cyclops.

Most would say that first time they saw this newest hero, it reminds them of the minions, but hey, don’t get deceived by his looks, he may seem small but with the right build and strategy, this hero can cause massive destruction with his mage skills.

Cyclops obviously is a Magic type hero, for the build go typical high burst mage, the combo should be: Ult + 2nd + 1st + basic attack, with this you can kill any ADC using 2 combos, you can kill heaps of enemies using this combo. You can use him to chase down heroes by using his B skills and Ult.

Though it’s still a debate whether to go full CDR or Glass Cannon for this hero. If you opt to go full CDR, you can have endless streams of spells but very vulnerable and dies easily. Cyclops is a passive Hero, and we’d suggest you get items to boost his skills.

This hero has amazing burst and lane harass, so don’t forget to buy bursty items instead of buying items like Magic shoes. Since he’s typically mana dependent, buy 2x necklace to boost his mana so you won’t struggle with mana while in the game.

Guardian Relic – +90 Magic power / 25% magic power / Exterminate : After a skill hits a target, a magic attack will immediately increase 15%. The next skill damage will terminate this effect. This effect can last up to 3 seconds with a built-in cooldown time of 10 seconds.

Astral Wand – +65 Magic Power / 40% Magic Penetration / Starlight : When Hp is over 70%, the unique attribute for this equipment will increase 30% This is all about damage.

Immortality – +800 Hp / +40 magic resistance / Rebirth : resurrect in 2 seconds after dying and get 15% HP and a shield that can absorb damage equal to 40% max HP. Shield last for 3 seconds. 180 seconds cooldown. If you can’t still burst down your target you can buy additional offensive item. A good late game item.


Cyclops was originally available for 32k BP but is now discounted down to 15k BP, there is a disclaimer that the discount may not be permanent.

There are other good builds for Cyclops, but you must give this one a try. You will be surprised at what you can do with him on your side.