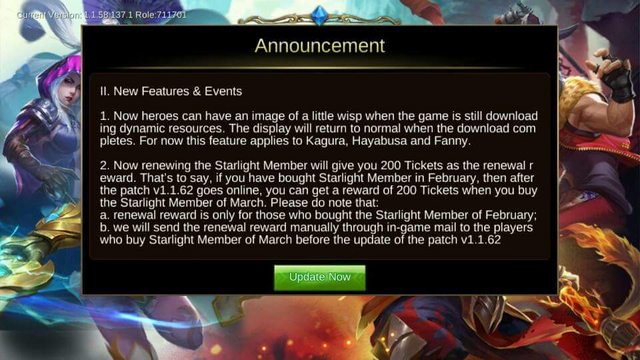 Mobile Legends: Bang Bang has released patch 1.1.62, which contains New Alice Skin, a number of balance adjustments to the hero, spells, and system.

Alice, The Wizardry Teacher! Looks amazing, and has it's own unique skill animations. Obtain from the time-limited event - Lucky Box.

1.  Now heroes can have an image of a little wisp when the game is still downloading dynamic resources. The display will return to normal when the download completes. For now, this feature applies to Kagura, Hayabusa, and Fanny.

Please do note that:

Kagura
Yin Yang Overturn: It's slowing effect can no longer stack with it of Seimei Umbrella Open. The total AP bonus increases from 2.1 to 2.4.

Chou
Only Fast: Duration of the slowing effect increases from 1.7 sec to 1.9 sec.

Alice
Flowing Blood: Fixes the problem that the animation time of the second-stage damage doesn’t sync with the actual time.

Alucard & Fanny
Adjusts the performance of their motion of basic attack.

Regen
Is no longer affected by CD reduction effects.

Optimizes the performance when scrolling the hero list and the display resets effect when switching back from other interfaces.