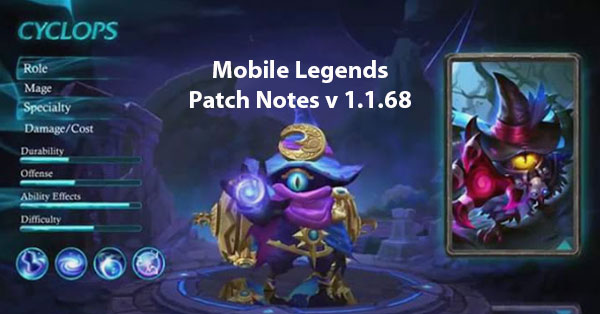 Patch Notes version 1.1.68 introduces new hero named, Cyclops for 15000 battle points only, this update also fixed some bugs that were seen on version 1.1.66.

According to Skadoosh! (MLBB Reddit member), he got this patch from one of the comments in a youtube video of JDale.  He says that it's legit and got it from them directly.

III. New Feature & Events
1. The models of hero Tigreal and his skin  Dark Knight have been remade with brand new demonstration actions and visual effects. New Tigreal and his skin now are on sale in the shop as a gift pack. Original price is 698 diamonds now it only costs 489 diamonds.

Players can set up their genders now.
a. Tap the avatar, then set up the gender in the ‘Basic Info’ section
b. There are 3 options: Male, Female, Unknown (default). After you set up the gender, it will show in the chat. If you choose ‘Unknown’, then it won’t show.
c. There’s a one-month cooldown before you can change the gender again.

New lineup tips feature for the Ranked Game.
After selecting the hero, players can post their heroes’ number of matches played and win rate in the chat.

Cyclops giftpack (hero Cyclops and skin – Exorcist) now is on sale with a price of 468 diamonds (original price: 668 diamonds).

New limited-time tasks:
3 tasks will refresh every 3 days. Players can complete the 3 tasks within the limited 3 days to win prizes.

Jungle Items:
Now players can only equip 1 jungle item at the same time.

Battle Spell
【Purify】It’s no longer able to reset the stacking damage layers on the hero.

AI’s performance when network lags has been improved: it’s smoother when chasing enemy heroes.
Battleground quick response: ‘Rally and push’ and ‘Prepare for the team fight’ have been removed. ‘Hang on and we will win’ and ‘Enemy missing in action’ have been added.

Mini map optimization:
a. Now players can zoom in to the map by tapping the exclamation mark button beneath the mini map.
b. There are different types of tap points on the enlarged map: buildings, jungle monsters, enemy heroes.
Tap allied turrets or base to remind your team to defense. Tap enemy outer turrets to send attack order. Tap the Lord or Turtle to tell your team to attack. Tap enemy heroes’ avatars on the map to mark them.
c. Tap the blank area on the screen to close the enlarged map.
It no longer shows the turrets and bases with particle visual effect when the graphics is set up as low.
Bug Repair

Brawl Mode:
The bug that character can buy gear automatically when taken over by AI has been repaired.

The bug that the gift combo still shows up even when the player doesn’t have enough diamonds has been fixed.

The bug that messages exceeding length limit still can be sent when spectating Arena Contest has been fixed.

The bug that hero will receive extra damage from Akai’s ultimate skill when using ‘Purify’ has been repaired.

The bug has been fixed that When Gord uses his Ult in the bush, the stealth mode won’t cancel if the skill doesn’t hit.

The bug that Alpha’s drone can be seen in the bush has been fixed.﻿