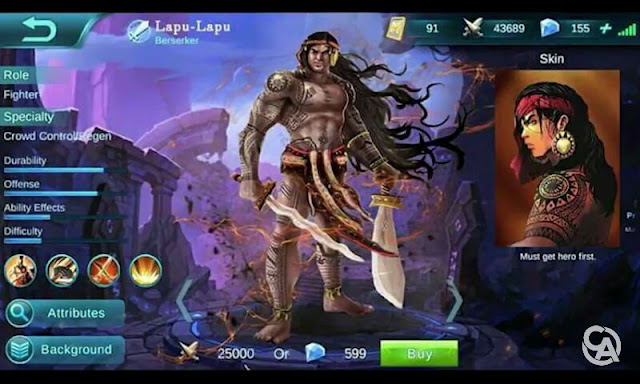 Yes, you got it right, it’s Philippines’ turn to choose the next Mobile Legends Hero and one of which we are looking to be the winner is the warrior LapuLapu.
If you’re a Filipino, you sure are familiar with this name, he is one of the famous Filipino heroes in Philippines history.


Just to give you a quick background where the concept of this new hero came from, Lapu-Lapu is a famous warrior in Philippine history for defeating foreign attempt in conquering Mactan, Cebu.

Lapu-Lapu is also the ruler of Mactan, and despite only a few records of his life, he was popular because of beating the explorer Ferdinand Magellan in their fight in Mactan.

Several fan arts emerged on how Lapu-Lapu may look like, and obviously a warrior type, near range and would be a strength and stamina type.

The art concept is way out of the norms of Mobile Legends, which definitely depicts where he was inspired: native, lots of tattoos, muscular and with that killer look on his face – an absolute warrior, just like the original LapuLapu.

Lapulapu seems to be leading the vote poll in Mobile Legends and his character as a warrior rose expectation to the players that this new character should be absolutely strong.

However, other voters are more excited to have Andres Bonifacio or JoseRizal to be part of the game, but let’s see the voters’ decision. If you want to vote for the next Mobile Legends’ hero you can in this link: VOTE MOBILE LEGENDS’ NEW HERO