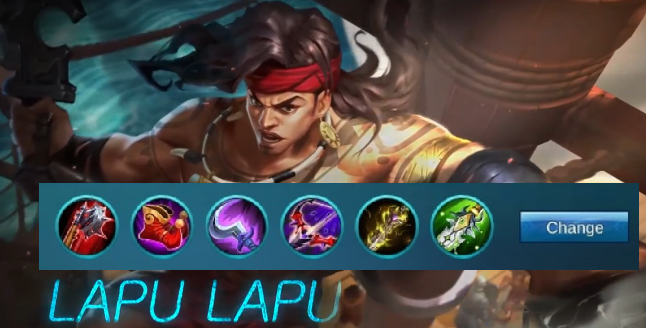 The new hero, Lapu-lapu has been on the spotlight for a long time. Now that the hero has been released, people have been experimenting guides and finding out a way to maximize his abilities and skills.
Given his 2 skill sets, he would most likely be wielded by those who have a large amount of skill cap so that his potential would blossom and punish those who think of him as a merely new addition to the game.

Due to his role being a fighter and an assassin it would be best if Lapu-lapu would have items that would maximize his attack damage. Another advantage he brings in the floor is his manaless abilities, making cooldown your only hindrance to annihilate your opponents. So without further ado, let’s build the perfect itemization for Lapu-lapu.

#1.  Bloodlust Axe – this weapon gives the wielder +70 physical attack damage increase and 20% cooldown reduction with a passive that every skill that damages the enemy gives healing to the wielder by 15%.

#3.  Hunter Strike – this weapon offers +100 physical damage and another 20% cooldown reduction. It comes along with a passive that increases the wielder’s movement speed by 30% after killing a hero. This passive lasts 2 seconds.


Now that we’ve discussed his build, the emblem you should aim for is none other than the physical emblem to maximize potency of your item build. The spell that we would recommend would be “Execute” as it deals additional damage to the enemy and making Lapu-lapu a threat even further.

This would be all for Lapu-lapu’s guide. We’ve covered every item that would be beneficial for the “Great Chief” and his exploits to the battlefield.

One reminder though that this items are great for him but we recommend if you also experiment and learn more about different items and its effect to the hero, who knows you might have found a off-meta build, be careful on testing it on ranked though!

Kidding aside, we wish you like on the game. For more Mobile Legends update, just stay tuned!