-->
You are here: MLPH » Lapu-Lapu New Hero » Lapu-lapu’s details have been revealed in Mobile Legends Patch 1.1.84

Lapu-lapu’s details have been revealed in Mobile Legends Patch 1.1.84 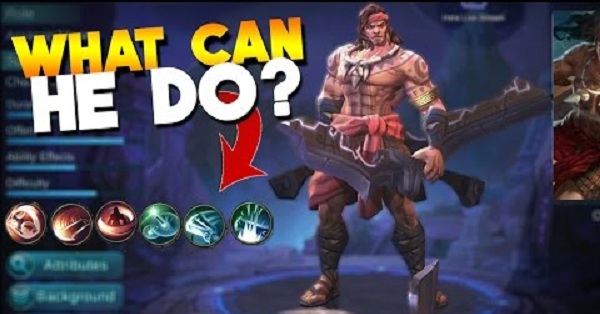 Guys! The wait is finally over! Lapu-lapu, the new Philippine-based hero from Mobile Legends has been announced and we all can agree that his character design and how they shaped his mechanics are truly outstanding!
Now, let’s have a look-see on what our upcoming hero will look like.

In Patch 1.1.84, the details regarding Lapu-lapu have been released. His moniker would be known as the “Great Chief”. His estimated released date would be at May 18,2017 at the advance server and it will be open to the formal servers at May 23, 2017.

His price would 32,000 Battle Points or 599 Diamonds. But for all those Filipino fans that would love to have this character and are willing to spend money on it, the 599 diamond price would have 30% discount on the first week that the hero will be released.

Here’s the background story of Lapu-lapu:

“The mysterious waters to the south of the Land of Dawn are dotted with islands big and small. Here the land is fertile, the climate mild. Life thrives, and food is in abundance. People live their lives of peace and happiness. But one day, a group of invaders came upon this peaceful land and disrupted the happy lives of the people. The chief of Makadan Island, Lapu-Lapu, refused to become anyone's slave. "The enemy has iron spears. We have brave hearts," he declared. Lapu-Lapu took up his twin blades and led his people into battle, slaying countless invaders. Under his leadership, they won victory and the respect of the enemy; free once again to live in peace. But this incident of "outside invaders" made our hero aware of the world beyond the island, and though beset by enemies, he packed his bags and began a journey to learn about this world.”

It seems like they adapted the history of Lapu-lapu where they fended off enemy invaders off their island. But now let’s take a look at how he will fare in the battlefield. Let’s see his skills!

It seems like there would be 2 skillsets for our new hero! According to the pictures in this tweet post,  Lapu-lapu would have 2 forms and it has also been described in this patch.

There would be a skin available for Lapu-lapu which is the “Ancestral Blade”. This skin and Lapu-lapu would be on sale in a gift pack which will cost 269 diamonds. A neat deal for the skin and the hero and those who cannot wait to try this hero can get it easier using the bundle.

So far that’s all what we got from the new hero. I believe that gameplay of the hero would be posted soon as he will be available in the advance server earlier than the formal servers. For more updates, stay tuned!