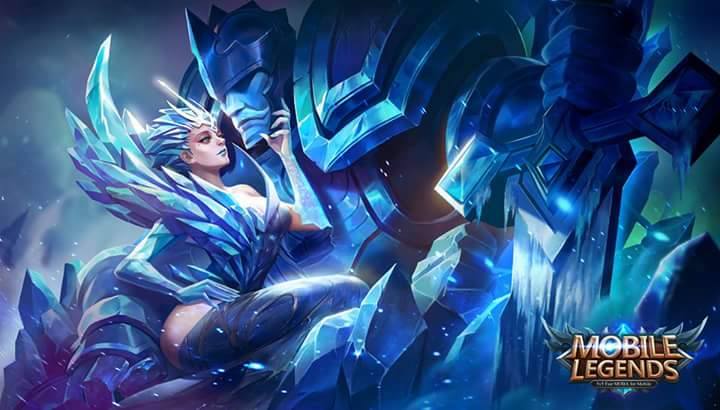 This patch introduces new hero Aurora the Queen of the North, 8 free hero rotation for everyone, some hero balance adjustments, and gameplay changes.

I. New Hero, Aurora, the Queen of the North

Chou
Fixed the bug that the skill description of Only Fast did not match its actual effect.

Hayabusa
Fixed the bug that Hayabusa would go invisible when he cast the skill and the target just dies at the same time.

Lolita
Fixed the bug of unable to specify the direction of her Ulti skill when they're enemy units.

1.Optimized the floor details of the map around the altars and turrets to make it more suitable to the world concept of Mobile Legends.
2.Optimized the skill mechanism of the Lord. Crowd stun effect now changed to avoidable crowd knock airborne effect, which will allow players to have fun of strategies when fighting against the Lord:
After every 5 attacks from the Lord,  an energy beam will generate under the feet of his enemies. 1 second later, it will knock airborne the enemies in the beam and deal damage to them.
3.The attack range of the Lord and the Turtle adjusted from 5 to 3.3.

1.Friend system optimized (this optimization is only for Android system at the moment while iOS users need to wait for the next update.):
a. Optimized the loading method of the friend's list in the Inbox. Now players can scroll the list up and down more smoothly.
b. Added the blacklist feature toFacebook friends. Now players can go to Inbox > FB Friends, and add their FBfriends to the blacklist. Consequently, they will show in the Blacklist instead of FB Friends list, and you won’t receive messages or invitation from them. Of course, you can cancel the block in the Blacklist to allow them to show up again in your friend's list.
2.Optimized the following interfaces to make them brand new:
Heroes list, Shop page, and Recharge page
3.Optimized the display of Arabic language.
4.Optimized the live stream system:

a. Live stream list improved:
1) Languages category added. Now the system will classify live streams according to players’ system language.
2) Add tags, including ‘Hot’, ‘New’, ‘Girl Streamer’ and ‘The WorldBest’.
3) Improved the rule of recommendations for live streams: dailyviewsRecommendations will be made according to popularities of streamers. Today’spopularities will be calculated anew every day, according to daily views, gifts received and newly gained followers.

b. Improved the Director Perspective in the live stream. Now the view of spectators is the same as it of the streamer.