-->
You are here: MLPH » Updates » Map Update for Mobile Legends 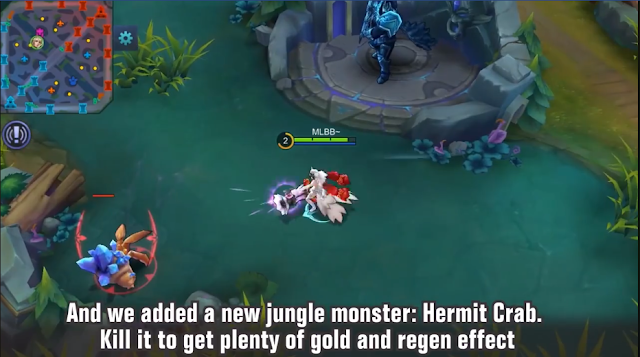 Today we’ve been enlightened on the new update of the map in Mobile Legends and this may be good news or bad news to those who are maining junglers in the game.

There are some adjustments to the monsters and additional monsters have been placed to make the jungle even more usable and can impact in the overall game of the players, so without further ado let’s begin explaining the changes related to the jungle.

First, let’s discuss on the left side of the jungle. First, they’ve made adjustments to the locations of the monsters in the jungle map, with this junglers can have a new pattern of which monsters to kill.

This will create diverse paths and effectiveness for the players who travel to the jungle.

Another fact is that, the goblin has been given a ranged attack which may have an effect to junglers like, when escaping the goblins when you have a very low health, it may kill you because of the range so watch out!


There’s also a new jungle monster which is Hermit Crab, it has benefits which is regeneration effects and gold!

On the right side, the Giant Month Monster and Reaper are there back-to-back, they are now neighbors and this might be an interesting change of style for those who prefer the right side first than the left side jungle.

Finally another change is that the Hermit Crab is also on the opposite on the turtle which means this might create a new tactic to those who plan to go on the turtle then get the hermit crab for the regeneration.


There we go with the Jungle Map Change for the game, what do you think about it? For more updates, stay tuned!