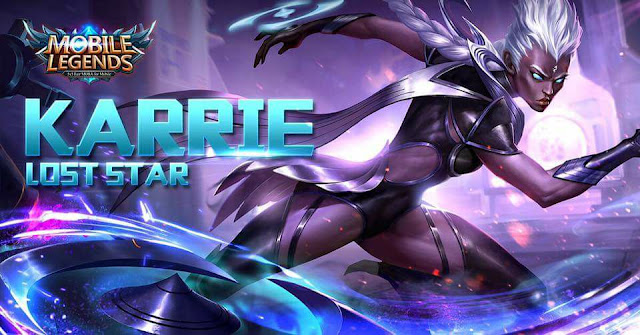 It seems like Mobile Legends Developers hasn’t have enough of the new hero barrage. There is now a new hero in the hero list in the game. In this article, we’ll show you the new hero Karrie, the Lost Star.

The new hero has the skin named Lost Star and she is a marksman in the game.  She will cost 24000 battle points since she’s a new hero in the game. She is a dark-skinned, white-haired woman with purple energy shurikens or in other terms, lightwheel as her main weapon.

Her specialty is burst damage and according to her ratings, she is less durable which is understandable as she is a marksman. Her offensive capabilities are devastating which is intriguing which will be a sight to see.

Her abilities would play a huge part in the game as she has an average to more than average rating in her summary; however her playability might be a huge factor as she is deemed difficult to handle. With that set aside, let’s move to the abilities.

This will be the breakdown of abilities for Karrie.

And that is the overall breakdown of Karrie, the Lost Star! You can watch gameplay f this hereo via Mobile Legends Bangbang, [video karrie+gameplay], What are your thoughts? Others have already played her in the advanced server and have been saying that she is OP.

Which is a good sign because the people who would like to have more awesome marksman would be interested in playing her, this would also affect the meta if she remains the same, only time will tell on how she will fare in the game.

But if she does, would it receive a nerf like others do, share your thoughts with us in the comments section and for more updates regarding the Mobile Legends, stay tuned!