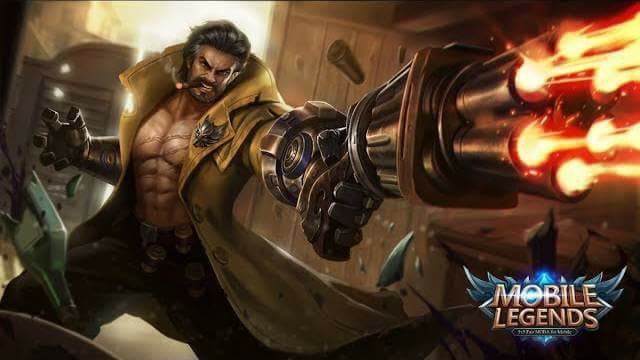 Once again, Mobile Legends have shown us that they have creative minds always thinking about new heroes to add to the game and they didn’t disappoint us once again. Let’s welcome the newest hero in the game, Roger the Dire Wolf Hunter.

Some speculate that he is connected to Ruby’s story regarding the reason that Roger according to his story, opened up the wolf king’s belly and saved a little girl might be Ruby, and it is really highly likely. This is amazing as we see possible connective lore that makes the game even more interesting to those players who look for depth in their game.

To know more about Roger, he was once a hunter that hunts for his livelihood in the dark forest but it’s not all peaceful because the Wolf King, the White Tooth started to going outside the forest. As Roger’s sense of heroism awakens he protected everyone and even saving a little girl from White Tooth’s belly that caused the death of the Wolf King. But, the king had an evil force emanating from him as White Tooth succumbed to his death. Roger had obtained the power of lycanthropy making him a werewolf whenever the moon is full. In order to protect his loved ones and to not harm them, he had no choice but to flee and go away from his family.

From what we see, there is really a high chance that it is connected to Ruby’s story but let’s talk more about Roger, on his entrance video provided by the developers he is seen being a wolf at the background and once he looks at the screen he lunges and scratches the screen, leaving a mark and transforms into the human form again with a gun and a cigar at his hand. Sounds pretty badass, but there’s more to that, his skin the “Dark Gent” also showed the same animation but his wolf form is much darker and he wears a gentleman suit rather than only wearing a vest with his chest with a wolf scratch mark being seen .

· Human Form: Normal attacks would decrease enemy movement speed.
· Wolf Form: Basic attacks will add damage of HP lost of enemy. To explain further, the more HP the enemy loses, the more damage you will deal to it.

· Human Form: Shoots two times quickly towards the enemy, the first one would cast a net that would decrease enemy movement speed and the second shot would deal huge amounts of damage
· Wolf Form: Jumps towards an enemy and can deal damage to three enemies when he jumps in the area, he will enter a mode that you can’t choose an enemy to attack to.

· Human Form: Jump towards the enemy and Roger would transform into a wolf, dealing enemy damage and further decreases the enemy’s movement speed. When he goes into wolf form it will increase his self physical and magical defense together with his increased movement speed.
· Wolf Form: Charges toward and returns to human state where he gains a shield to absorb damage.

That concludes the skill list for Roger and if you may have noticed he has a lot of skills regarding slowing the enemy down and some skills that make you hunt the enemy down.

Those skills are perfect for a character that is a werewolf. He will be an interesting hero as he can be a marksman and a fighter at times since his ultimate will make him a werewolf as per legends tells us werewolves are strong and has high killing potential, we’ll see how Roger will affect the Marksman role in the game. That is all for now and If you want more news about Roger and Mobile Legends, just stay tuned!