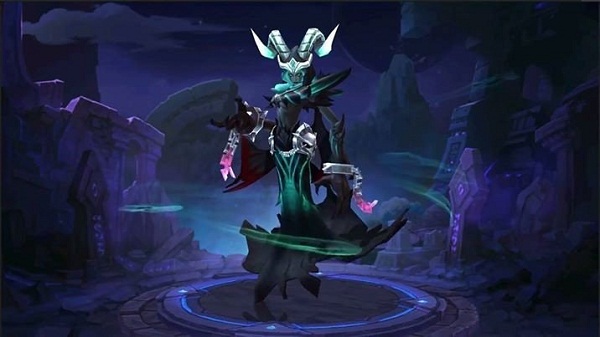 If you think that Mobile Legends have been releasing too many heroes and that they might run out of ideas soon, well think again!

Yup, that last sentence should give you a clue on what Vexana is. Her title is “The Necromancer” and she is levitating and wearing a cloak with long sharp horns (scary). She has a big skull in her back and its eyes are glowing light blue.

In her video that showed her animation, she has some souls that are surrounding her and went inside her and then when she turns towards the camera, she releases them all and surrounds her again quietly, this may be a teaser for a skill that she might have.

Meanwhile one of the splash art shows her having a bolder look with two souls bound in front of her, always looking scary. From all aspects, you can expect her being a mage with an ability to keep and release souls, but who knows, we are merely speculating about what Vexana can do.

According to bluepanda, Vexana skills are:

1st skill - Unleashes ghost power to create terrifying skull which attacked in a forward direction dealing X magnet magic damage causes the first hero hit and any heroes with a small area to lose control and moves toward the necromancer lasting X seconds.

3rd skill - Put the curse on enemy heroes that last X seconds deals X magic damage and causes the target to receive X magic damage per second, if the target dies while under curse the target will be resurrected and become a necromancer puppet fighting for the necromancer. A resurrected puppet will in hurt X percent of the original attributes and continously deal that clawed damage to surrounding target dealing X percent of enemies max HP, asthmatic damage puppet last X seconds.

Passive - Cast spell to target who take damage from the necromancer lasting X seconds. While the spell lasts the target will explode upon death, dealing X magic damage to surrounding units. Units who received clawed damage from the puppet will also have necromance spell cast on them

As far as we know, this is only the tip of the iceberg of what Vexana would be. This would bring hype again to the players and especially those who wish it to be a mage.

We can see a lot of potential in her and time can only tell on what her kit brings to the game. For more information regarding Vexana, stay tuned!