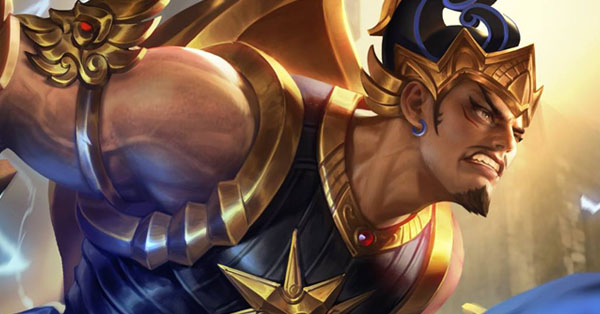 Gatot Kaca is the Indonesian hero of League of Legends. He came from a legend and is widely known in literature especially in Asian Literature. Now that he made an arrival to the game, we will decipher on how he should be played.
Now, Gatot Kaca is a tank that can deal magic damage, he can initiate fights due to his ultimate and sustain damage from the initiated because of his tanky build. But he can also be useful in deflating enemy heroes’ health and have a massive impact offensively.

The emblem you should pick should be “Roamer” and the Battle Spells should consist of either Sprint or Flicker. The start of the battle, we prefer for you to pick 2 magic necklaces with its mana regen, you can use his spells more.

His passive tells you that GK can get tankier while being in low health and if you battle someone with high HP, GK can heal so it is best to go crazy and attack but always be wary of your health so you will not die. The skill priority should be in Skills 1, 3 then finally 2. Skill 1 is your main harass tool as you can deal damage and slow enemies in a path. Skill 2 meanwhile will be your taunt. The tactic here is that when your enemy is about to hit the tower use it. It would focus on you making the tower attack him while still attacking you.

The combination is skill 3,2 and finally 1. Ultimate makes you engage with the enemy. Once in range, you can use skill 2 to make them hit you. Once you have the item “Concentrated Energy”, you can spell vamp because of the magic damage returned from your Skill 2. Skill 1 is your finisher if they are still alive after your carnage. Slow them down, and shut them out.


You can also be a tool in team fights as you can initiate the battle. With you at their side, you can ensure the win in the team-fight. Just follow the combination and you’ll be alright.