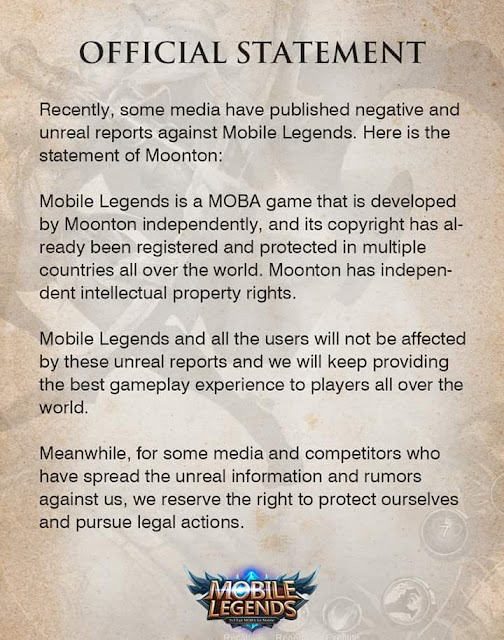 It has been a rocky start of the week for the developers of Mobile Legends’ Moonton.

Just recently, the creators of League of Legends, Riot Games have filed a lawsuit against the Mobile Legends Developers and it doesn’t look too good for them.

However, their first step was to respond to the claims and the fake news that they are dealing with. Here’s a picture showing their official statement:

A lot of people are speculating that Mobile Legend copied different aspects from Riot’s flagship game which is League of Legends.

This game is also a MOBA or Multiplayer Online Battle Arena which is in the same genre of Mobile Legends.

What they’ve said in the statement is that they’ve had registered the game in the copyright laws and it is now being protected in different countries and that they have the intellectual property rights to defend the game itself.

They’ve also encouraged the players that the game wouldn’t be affected by those unreal news and that they’ll still continue to offer the best experience for their users. Also, if they have found out that the ones who are spreading the rumors continue to go on, they will not hesitate to protect themselves and pursue legal actions.

If we are to describe the art style of the map and other aspects, it really resembles the one, League of Legends has but you got to consider what Mobile Legends have to offer.

Sure, they have the same mechanics but that’s what happens with games that are in the same genre. They would have same mechanics and such which may be controversial to others, but those things are pivotal for their improvement of their games and making it better by competition.

Let’s just hope everyone settles down and fix this without having a major impact on the MOBA industry.