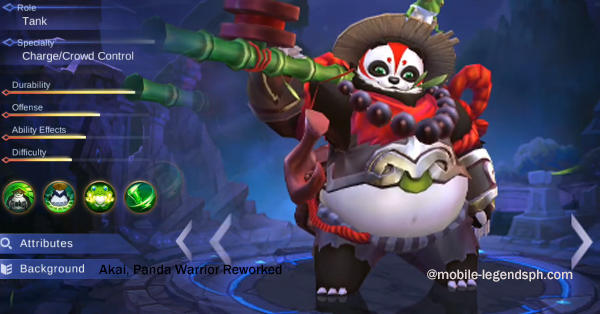 I really don't know if this is a good or bad news for all akai users here on Mobile Legends. According to Mobile Legends, Panda Warrior Akai Remade hero will be tested like new heroes, on Advanced Servers first. Cannot be purchased.

When officially released, will replace old hero and skins. Players can try out the hero from the Weekly Free Hero Rotation in match-up mode. (During testing the original Akai will not be affected for normal use), ML update on Patch notes 1.02.12.

Even the clumsy panda can dream! Far away in the villages of the far east, where pandas mostly enjoy a carefree lifestyle lives an Akai, a panda that loves rolling around that wants to become a warrior. Despite his parents telling him to give up his dreams and the constant teasing of his friends, the clumsy Akai never gave up. He trained every day in order to become stronger and soon he attracted the attention of a wandering monk. Under the tutelage of the monk Akai mastered the flail, hoping to use it one day against the best fighters in the world. Now is the time for Akai to shine! Ultimate:Wind Dance
Spins like a tornado, knocking back and dealing damage to enemies (damage decays while hitting the same target).

Passive:Taichi
Gains a shield that absorbs damage whenever he uses a skill. The effect has a cooldown.