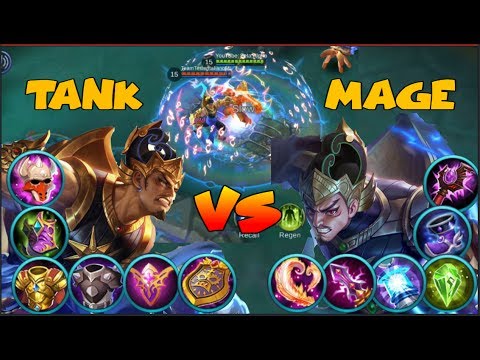 GatotKaca is an amazing tank. He can initiate by punching above the sky, slows and finishes an enemy, taunts and buys time for his teammates and more.
But Meta isn’t always better especially in every Multiplayer Online Battle Arena or MOBAs. So put in the test which is better a full tank or a full magic damage hero? A mirror match may show which is superior.

A standard tank build vs a magic damage build for GK.

The fight lasts for minutes. Tank build prioritizes on making sure that he is still alive to deplete magic damage’s mana. GK’s passive also lets him be tanky while having low health. Dealing damage to the magic damage GK, assuming Tank GK still is in lower health than his enemy, he will heal back making sure he survives every blow dealt by skills of magic damage GK. Magic damage GK’s priority is to deal damage and finish off Tank GK. Making sure his ultimate and the skills hit the adversary.

If Tank GK is agile and has quick reflexes, he will survive, but if not, Magic Damage wins. If Magic Damage GK misses all of his shots and doesn’t conserve mana well, Tank GK wins. It’s all about circumstances.

Magic Damage GK is better than Tank GK. Dealing those magic damage straight to the enemy will make sure that those enemies are done for. Count in the teammates of Magic Damage GK, the job will be quick yet Gatot Kaca survives. Why? Because his passive makes him tankier as he has lower health than earlier.

Diversity is what makes these games great. One must explore every possibility to be a great player. For more insights, stay tuned!