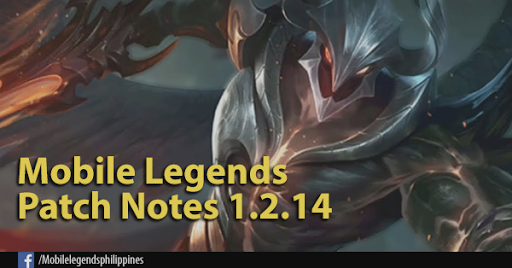 Mobile Legends updates - ML Patch 1.2.14 Notes. Finally, after several days of waiting, Mobile Legends released ML version 1.2.14. This is the official changelogs at the moment. Can't wait to try it? Check out first below changes for this update.

Dear players, we have never stopped the discussion and changes about hero balancing in order to provide a fair and better gameplay environment. However, after we watched all the matches during 1st MSC, we still found a lot of heroes hard to show their strengths and abilities. After reading feedback from players in forums and the official website, we decided to make some changes to the map as well as some heroes so that more heroes will have the opportunities to show their faces in the Land of Dawn.

Turtle/Lord Location Change
After analyzing MSC match data, we found in the original map, the team that was closer to the Turtle/Lord usually had the advantage of taking them, which is not our purpose in the first place. In the new map, we have moved Turtle/Lord to a location that is closer to the center of the river. This change will bring more attention to them and we’d like to see more fights around them. (We have designed 2 plans for the location change, the other one will be released later)

We have adjusted some elements in the jungle area and bush locations to make farming and ganking more variable. (PS: Some element changes may affect the hero who relies on walls, like Fanny etc., it is not our purpose but we would like to see the impacts.)

1) Turtle spawns at 2 minutes in a random location. Lord spawns 3 minutes after the Turtle is killed in a random location. 4 minutes after Turtle spawns and it isn’t attacked in a short period of time, Turtle disappears and Lord spawns.
2) Lord respawns every 4 minutes in random location after it is killed
3) Location and a countdown of Lord and Turtle are displayed 120 seconds before they respawn
4) Killing Reaper and Spinner grants the same BUFF that varies based on the killer’s class (6 BUFFs)
5) Killing Giant Mouth Monster grants more health; killing Ghost Mage and Goblin grants mana now
After Hero Attributes and New Map are updated, we will find out and implement the most appropriate changes by analyzing survey and data. Dear players, we would appreciate it if you can give us your feedback when you receive the Survey. Every voice matters to us.


I. New Hero and Revamp

Nightstalker - Argus 599 Diamonds, 32,000 BP, 30% OFF First Week
Note: He will be released on Advanced Server one week earlier.

Hero Specialty: Argus is a courageous Fighter as the battle continues who has the ability to become immune to death in a short period of time.
1st Skill: Demonic Grip -- Puts out a demonic hand at the targeted direction, dealing physical damage to an enemy hero and moving to the front of the target, then he is able to make a quick slash towards the enemy, dealing physical damage. If it doesn't hit the enemy hero, he pulls himself to the location.
2nd Skill: Demonic Blade -- After a short period of charging, Argus strikes the enemy with his demonic blade, dealing physical damage and cursing the enemy for X seconds. Moving enemy under curse effect leaves a trail that grants Argus extra movement speed while he is moving on it.
Ultimate: Eternal Evil -- Transforms into a fallen angel and becomes immune to death. Part of the damage dealt by him during the ultimate will be converted to Argus's health after the ultimate.
Passive: Warmonger -- Taking or dealing damage will charge the demonic blade (the lower his health is, the faster blade charges), when fully charged Argus's next basic attack will be two quick basic attacks.

Grock:
Skill sound effect improved
-Wild Charge: Damage when hitting a wall or a turret increased by 100%
-Power of Nature: Backswing time reduced. Fixed the bug that only he can see the skill effect; Fixed the bug that when near to a wall, he becomes immune to control while casting Power of Nature b
-Ancestral Gift : Added effect – Becomes immune to control when near to a wall

Layla
-Attack growth adjusted to 8.75 from 10.75
Clint
-Improved the effect of Clilnt’s skins: Sun 'n Sand and Guns and Roses

Hayabusa
-Quad Shadow: Slightly increased the cast point; Fixed the bug that the skill can be used while being controlled

Ruby
-Let’s Dance!: Ruby's basic attack has no lifesteal effect, however her skills own 125% physical lifesteal effect. After every skill casted, Ruby can jump to another place, increasing physical and magical defense for a short period of time (effects increases with level，up to 3 times). Ruby owns 5% physical lifesteal.
-Let’s Dance!: Jumping back has the same distance while jumping forward increased slightly

Hilda
-Blessing of Wilderness: Shield lasts until she leaves the bush
-Combat Ritual: Slow duration increased to 3s from 2s

Surrender System: Surrender system added in Draft Pick
In some high ranked matches, performance in the early game somehow decides the battle result, but we found some players left the game as soon as the game started which makes the match 4v5 or worse.
To help solve the issue, when there is a player leaving the match for a long time in the beginning, you are now able to surrender at 3 minutes and rankings & win rates of both teams’ players will not be affected. However, the player who left the match will lose starts and punished.
To prevent from players using certain loopholes in the system, the team-up players will lose the same starts too. We will keep an eye on the system.

Battle Spell：
Aegis: Now the minion’s basic attack won’t be blocked and the shield won’t lose stacks because of it.

Live:
1) Improved how to watch live: Now you will enter friend’s room before watch live.
2) According to Facebook policies, Live on Facebook will no longer have default titles. Players need to enter the titles on their own
Improved Voice Chat: Reduced the loading time after tapping the voice chat button and microphone will be on at the same time.

Classic/Ranked Change:
1) Improved the rules for Draft Pick in Ranked
2) Players can see their current ranking info after minimizing in the Ranked room
3) Improved friend list display in the home screen by making ranking badges more obvious
4) Improved “Match Found” by changing to non-fullscreen
Improved Report Mail tips by adding time and other details
Adjusted Emblems, they can be seen in the bag now
Improved Hero List sorting system
Improved Chest Push Notification system
Improved loading font and loading bar
Changed 3 old avatars to make the avatar style consistent
Adapted 18:9 screen smartphones
Added Myanmarese in the game. Thanks for the supporting from MM players!
ML Glory Avatar Frame Upgraded! To thank the players who have been helping us (Moderators/translators/YouTubers/Contributors etc), we made the border fancier!