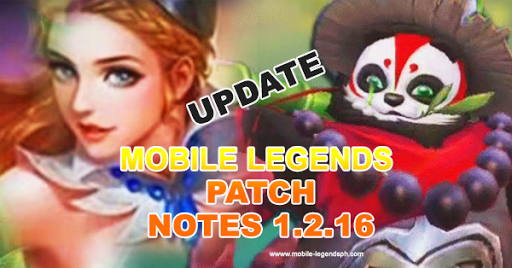 I. New and Revamped Hero

1. Panda Warrior Akai Hero has been remade with all new model, skins, and playstyle!

Even the clumsy panda can dream! Far away in the villages of the far east, where pandas mostly enjoy a carefree lifestyle lives an Akai, a panda that loves rolling around that wants to become a warrior. Despite his parents telling him to give up his dreams and the constant teasing of his friends, the clumsy Akai never gave up. He trained every day in order to become stronger and soon he attracted the attention of a wandering monk. Under the tutelage of the monk Akai mastered the flail, hoping to use it one day against the best fighters in the world. Now is the time for Akai to shine!

Hero Characteristics: The new Akai is crowd controlling Fighter/Tank
Skill 1: Thousand Pounder --Jump into the target area, dealing physical damage to enemies after landing, targets within the marked area will also be stunned.
Skill 2: Blender ---- Fires a shock wave at the enemy, shock wave will explode on contact with the enemy or once it reaches maximum range, dealing physical damage, marking enemies; basic attacks on marked targets get a percentage of Akai's maximum health as extra physical damage.
Ultimate: Wind Dance ----Spins like a tornado for a period of time. Each collision will knock back the target and deal magic damage. During this process, the hero is immune to slow down effects, and casting this ability will remove any negative effects from the hero. Movement speed will be increased for the duration of the skill.
Passive: Tai Chi – Every time Akai casts a spell, he will receive a shield that on top of his maximum health that blocks a percentage of damage taken, this effect will go on cooldown after the last shield for a set amount of time.

Miya Skin- Modena Butterfly, All new legendary skin, all new experience, win it through the “ Magic Wheel “, winning it will unlock a special avatar and shareable picture.
Kagura Skin- Sakura Miko, 749 Diamonds, First Week 30% OFF. Releasing soon.
Akai and his Dkin-Summer Party will be gift packed, first week 30% OFF. We have remade the Panda Warrior Akai and his skin, Slumber Party has been revamped completely, all new panda experience.

Adjusted for some heroes their recommended equipment
In this version we have made some adjustments to Yi Sun-shin . Firstly about the Bleed Mechanic, we originally hoped this mechanic would complement his skills, helping him zone others to create a unique playstyle. In the actual play setting, this was weaker than we expected, so we have removed this mechanic. Instead we have increased his close range basic attack damage as well as giving Blood Floods an extra slow effect for his close range basic attacks. At the same time we have buffed Blood Flood’s charged damage, allowing better outplay potential. We hope these changes will help Admiral Yi become a formidable force again.

Yi Sun-shin
Removed Bleed Mechanic, Heavenly Vow effects adjusted to” Yi chooses his longbow or glaive to attack according to his distance from the target. Glaive basic attacks will deal more damage and also slow the enemy. A command ship will be summoned to fortify the base. The hero can board the turtle ship beside the base periodically and get buffs.
Blood Floods: Charged up attack damage increased from 1-1.5 times to 1-2 times, targeted enemy will be slowed within 2 seconds.

Chou
Health per level changed from 195 to 206
Way of the Dragon : Using the second part of the spell on a knocked up enemy will no longer CC them, only damage them.

Grock
Wild Charge: Cooldown for all levels increased by 10 seconds

1. Tapping social area will continue to the official website
2. In game browser optimized
3. Saber Skin: Codename-Storm, will have now have a unique shareable picture after finishing a game