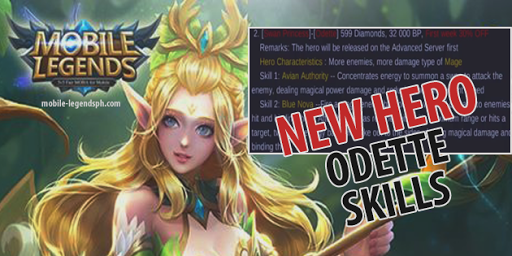 Hey, guys, We're back again to give you a bit of information about the newest mage named Odette, the Swan Princess.

Obviously, just like other new heroes, Odette's price will be 599 diamonds and 32000 BP, 30% off for the first week, and will be seen first on the advanced server.  Also expected to release on upcoming version 1.2.18 patch of Mobile Legends.

Skill 2 Blue Nova
Fire a magic energy ball forward, will deal damage to enemies hit and binding them. After the ball has reached either its maximum range or hits a target, two extra balls will strike out to the sides, dealing magical damage and binding them.

Ultimate Swan Song
Performs a song that summons the surrounding energy to damage nearby enemies, every time dealing a magic damage, it will also refresh the rebounding effect of Lakeshore Ambience. Damage taken during spell cast duration will be reduced.

Passive Lakeshore Ambience
Basic attacks after a spell cast will be enhanced with rebounding sound wave. The sound wave will rebound amongst nearby enemies dealing magic damage.

This is all we have for Odette. For more news regarding Odettes's gameplay, Item, and Strategy Guide stay tuned!
Next Post Prev Post