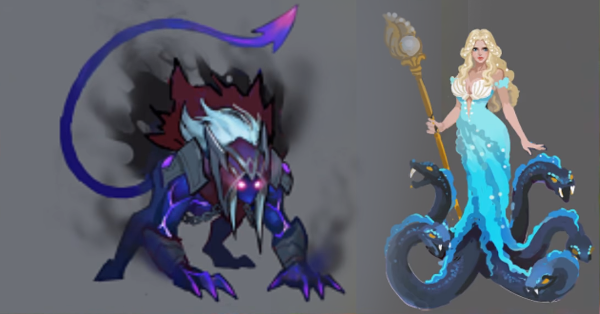 It seems like the developer of Mobile Legends, Moonton has been rolling with new heroes continuously and seamlessly, but if you think that after their barrage of hero creation, you’re guessing it wrong as Moonton has asked people of their opinion regarding the plans of their new hero designs and they have given the players 2 designs.

First one: Is a void-like monster that resembles the Zerg Zergling in Starcraft one minus the tentacles, it has shoulder guards, leg guards and what seems to be a helmet that would protect its body parts from attacks. It has a pointed dark bluish to purple tail. It has maroon hair and glowing pink eyes.

Prospect: From the looks of it, that monster is destined to be either a fighter or an assassin. But I am putting my support on the assassin route as it fits to be deadly and bursting a hero with its claws and its appearance appears to be menacing.

Second one: She is half-human with snakes as her feet. She has blonde hair and the snakes are seemingly connected to her blue dress and it contains clam shells that cover her breasts. She has a yellow staff that has a gray orb in it, together with its leaf-like design at the top.

Prospect: I believe that this hero would be either a mage or a support, because of the staff, I am pretty sure that she would cast spells to rain against her opponent or support her teammates.

The developers are working non-stop in delivering content to the gamers and it seems like they are not stopping! Let’s support the game just as much the game entertains us, its gamers. For more updates of the game, stay tuned! Source
Next Post Prev Post