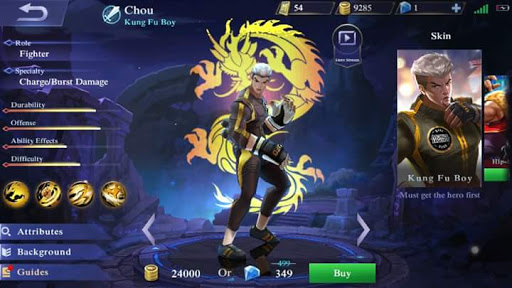 Today, in the game's Mobile Legends patch notes (Advanced Server), it has been said that Chou's character would be remade. The appearance has definitely changed.

From the Bruce Lee like costume, now he has a gray and yellow strips suit and now has white undercut hair. On his suit it has "Mobile Legends" as its logo at the right side and at the back, it contains the words "Bang, bang". Also, he has nunchucks at the back.

For the display of the hero in the loading screen, it has still the same look but it now follows the new design of Chou. It looks pretty bad-ass than the last one.

After that, the animation of his skills have been slightly different, but the most notable is the fire animation when he moves. It has a refined work on it and you can see that the developers are doing their best for their players.

Now, you may ask why does the developers did this, fun fact, they added a little story about it.

It seems like Lancelot and Chou have become friends and Lancelot keeps telling Chou to change his outfit as he sees Chou's taste in clothing to be the worst. Tired of Lancelot, Chou decided to follow him and change his style, but Lancelot is laughing so hard at the back because of Chou's decision.
The developers also had a hand of this one, they thought that Chou's original model and design is too simple and this rework will make him look more like a man of activity and youth.

So it was a friendly push that inspired Chou to change his outfit. Small things like this make you think that the developers are doing their best to please the players.

So, what do you think, are you happy with the change or not? For more information regarding Chou and Mobile Legends, stay tuned!
Next Post Prev Post