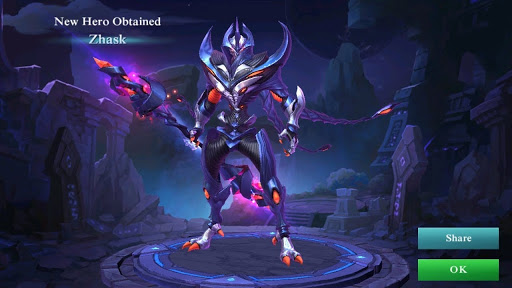 Before we discuss, let’s consider this, Zhask is the newest hero in the game, while getting some nerfs in the past patch, we can still see that his skill is still strong. Nevertheless, new heroes always get nerfs from the very start, so let’s see how he will look at the next few patches.

For more details, Zhask is a mage that prioritizes in poking enemy heroes and destroying their turrets, his first skill is his bread and butter as his turrets can somewhat be a pain and damage heroes and turrets tremendously and his ultimate only make it better by making the turret stronger and tougher.


But always remember, mages are always weak against attacks as they are the damage dealer of the team and must focus on that area. Leaving a vulnerability of his health.


Here are the things that may be needed in defeating Zhask.

a. Hayabusa
Hayabusa is a skilled assassin that can kill Zhask in a flash. He is well-known for being an assassin that doesn’t need a player’s high expertise level in order to deliver a great kill to Zhask. A perfect delivery of the second and ultimate can seal the deal for Zhask.

a.1. Reckless Mix
First, make sure that the phantoms have a placement close or if possible inside Zhask and when the turret is down or Zhask may be out of range of the turret, go in for the kill. Since he would usually be a squishy one and Hayabusa’s burst damage, he will be gone in no time!

a.2. Playsafe Mix
Go in for the ultimate and make sure Zhask is the only hero there. Chances are, the hits in your ultimate will be sufficient enough to kill him but If you’re doubtful, damage him a bit first. Zhask will probably use his ultimate on a turret close to you two, make sure his down and out. If so, use your second skill to escape his tower of doom before it’s too late!

b. Chou
Chou can counter Zhask if you made Chou a tank build. Chou has the chance to stun that can change the tide of the battle, with his skills having an immense amount of damage Chou can combo Zhask before he can make a move for himself. With Chou being a tank in this one, he will probably absorb all the damage the tower can give to him.

c. Harley
This may be a huge gamble but you will always have Harley’s escape mechanic to work. Go and poke him with your first skill and wait for him to engage. Avoid his turrets, use the ultimate when in range and keep auto-attacking to proc the damage increase of Harley’s attacks on Zhask. Keep attacking and make sure that you kill him before he gets to use the ultimate, but if he did already, just use the escape skill of Harley so you can get the kill and he doesn’t.

d. Irithel
Mobility is key to avoid poking enemies, especially if you have an enemy hero with an immobile skill. Irithel has a lot of poking mechanics on her. She can attack while moving making her avoid the shots of the turret as much as possible, therefore avoiding herself to get stunned.

Once you feel like you’ve poked enough and you’re ready to kill him. Make sure the turret is down, use your first skill to deal more damage and weaken his defense, then use your ultimate get as much as range as possible.

Finally, if he tries to escape then use your second skill to slow his movement speed as you’re pinning him down. You will always get him though since you can move while attacking, making Irithel a dangerous enemy for Zhask.

e. Zilong
Another assassin but also a fighter role. Zilong is quick and powerful for Zhask. If Zhask is caught off-guard then Zilong will rush using the third skill and damage Zhask quickly. The possibility is Zhask running away, use your ultimate to catch him. Use your first skill to make sure he doesn’t escape!

But be careful to not return to his turret, he may use it against you. Zilong’s answer to Zhask simply because of his tremendous amounts of damage and how Zilong can catch Zhask can kill him as quickly as possible.

a. Don’t solo him unless you have the advantage.
Fighting him off alone can be a dumb move if you don’t measure your chances against him. If you are an assassin, then make sure that he used up all his skills or some are on cooldown. Once you catch Zhask, burst him before he can retaliate. Now if you’re not an assassin and you just want to score a kill, then don’t. Even if Zhask’s role is to push turrets and poke enemies, a proper and skilled Zhask can turn the tide in their favor thus wasting your effort and just making him stronger.

b. Aim for Zhask, not the turrets.
Whilst, making sure the one that deals you damage is dead, even if you do take that down, Zhask will always have another turret for you to handle, making your efforts fruitless. If you are in a team fight and a Zhask controls the fight because of his turrets, make sure you kill him! It must be the priority of the group to kill Zhask because if he ever unleashes his ultimate within the fight, then it’s basically a lost team fight since his ultimate tower brings so much damage and durability.

c. Don’t overcommit on Zhask.
It’s understandable that you want to score a kill on Zhask so you can get experience and hinder the enemy team but do not overcommit in killing him. You may be bound for his traps and you get ganked, remember also he can always take you down a 1v1.

d. Think before making a rush move.
Being the new hero on the block, Zhask will probably wreak havoc in the game for some time, but once became more familiar in the game, the hero will be more exposed to weakness by newer heroes or by nerfs and buffs of certain heroes so keep on training and remember these guides in order to take down the Dominator.

That’s all for today! Do you have more ideas of a counterpick against Zhask, let us know! And if you want more information regarding Zhask and in the game, stay tuned!
Next Post Prev Post