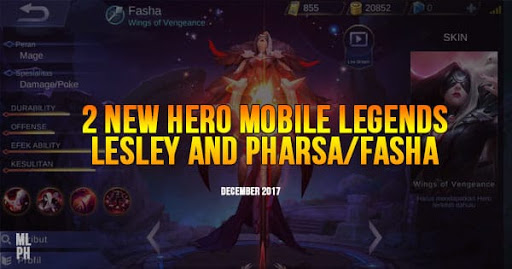 December, the final month of the year. 2017 has been great so far. With several heroes being released from left to right, the barrage isn’t over for this festive season. Today, we will discuss Lesley and Pharsa/Fasha.

Lesley is a marksman. Her skills will be focused on long ranged attacks and a stealthy playstyle. Apparently, she will be a sniper in the game.

As the game has been evolved into different metas, this sniper plans to capture the gamers as it involves a lot of proper hero placement and range control. She will also be versed in stealth movements. Hiding in plain sight and ready to strike. She will cost 599 diamonds or 32000 BP with a 30% off the first week of her release.

Pharsa/Fasha will play the role of a mage.


The only description the game gave her is that she will be a super-ranged mage. That being said, we can be aware that she will also have a long-range auto-attack like the first hero, Lesley, but not the same.

Her kit will contain various spells that will focus on dealing magic damage overall. With this in mind, she is no doubt a powerful Mage to be released with a price of 599 diamonds or 32000 BP, like Lesley, she will be discounted 30% off the first week.

Are you excited about these two (2) new Mobile Legends heroes? The theme of these two are getting in range and poking damage to the enemies.

For those who love this playstyle, anticipate it as the release of these heroes will be 11/30 for the Advanced Server and 12/12 for the Formal Servers!

For more information about Lesley and Pharsa, also for the game, itself, stay tuned!
Next Post Prev Post