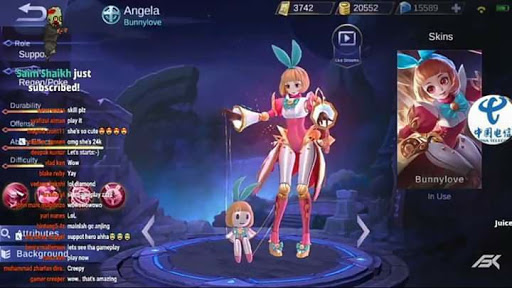 The support class has been really been lacking for having new heroes lately with Hylos as one of the latest support class, the support heroes need to step it up a notch and the support mains have been finally been given a gift introducing Angela.

Angela is a regen/poke hero with the goal of making sure the enemies have a hard time in eliminate the support’s partner, the carry, and Angela’s second goal is to heal the carry. How? Take a look at her skills and find out.
Her appearance is very robotic and in the hero animation, she needs to be awaken by the puppet she is carrying around, which in turn she controls once awaken. She has a blond hair with a teal bunny headband in her head, she has a pink and white color motif with a teal ribbon too.

Her main focus would be in ability effects as she is proficient at that in accordance to her levels in the hero page. She would be a great support to come and may be a deadly one in the late game if permitted by the team of course.

Hero Specialty: This beautiful android has a full-map support skill, and can deal dangerously high damage.

2nd Skill: Puppet-on-a-String
Launches a puppet string at a specified target, dealing magical damage. If the target remains attached, it will be immobilized and take magical damage, with each Lover's Mark increasing the final damage.

Dove of Love
Read also,
Will you use Angela in a game more? Will this hero make you love support even further? For more updates regarding Mobile Legends and Angela. Stay tuned!