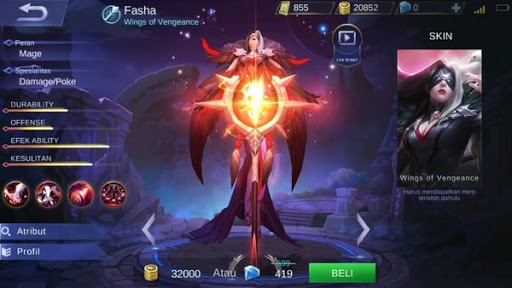 Fasha is a “super-ranged” mage as the patch note 1.2.36 suggested us so. She is a mage that and has the specialty of poking and harassing enemy heroes because of her very long ranged weapon auto-attacks.

Albeit being a mage, she will have decent durability on the battlefield, but we still don’t recommend her close to the enemy. Place her somewhere safe so that you can poke to your heart’s content.

She has somewhat not a strong offense meter as the meters suggest but her offensives lie on her abilities which appear to be the most dominant strength of this new hero, therefore her difficulty bar would be a lot higher than usual. You will need to train very well in order to tame this mage.

Forget about training her yet, she also has another pet to be tamed. Meet Verri, her white bird that assists her in battle. She will be very useful in Fasha’s skills. Her clothing seems to look like a bird with the color scheme of the opposing colors, white and black. Her hair is also divided into those two colors. She has black wings and a black top and a black and white bottoms. She has a staff that contains a red crystal that emanates power. Seems to be a very fearsome character.

Pharsa/Fasha will play the role of a mage. She will be a super-ranged mage.

Ultimate: Feathered Air Strike
Pharsa flies into the air and launches an air strike, dealing magic damage to a targeted area in the next 13 seconds.

Passive: Spiritual Unity
Every once a while, Verri enters the Hunting state, during which Pharsa deals extra magic damage and slows enemies.
As we look into Fasha, she looks like she will create an impact on the game together with the other hero, Lesley. Want to find out more about them and the game? Stay tuned!
Next Post Prev Post