-->
You are here: MLPH » Fighter Jawhead » Jawhead - Skills and Abilities 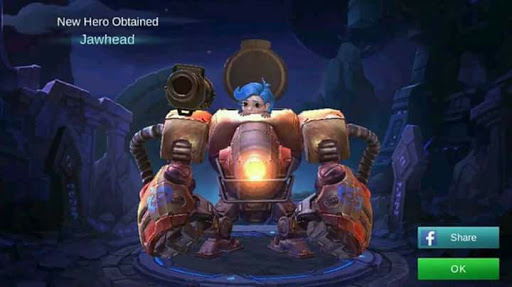 Do you want a hero with the touch of that sweet and yet awesome steampunk design? Do you want a Bioshock-like hero in the game, then the developers have answered your prayers, presenting Jawhead, the Steel Sweetheart!

This new hero is the partnership of a little blue-haired girl with a red dress and the steampunk robot that has oversized hands that are connected to the shoulders that also looks oversized by wires. His eye is located at the front and it glows a bright orange one. His feet are also connected in wires and he carries the girl on top like the girl’s the pilot.

As a fighter, he would have great stats according to the game’s overview. You can stand and face the enemies upfront because his durability is rated above-average so don’t be afraid to the front and deal damage in a team fight. His offense as well is almost the same level as his durability so go ahead and deal damage. His abilities would be useful in the long run so always use them for more potential power. With all these being said, he might be more difficult to use and master so be patient and just keep practicing to reach your full potential in playing this hero.

Clandestine organizations have existed throughout the many ages of the LAnd of Dawn's history. NO one knows the true purpose of these organizations, but one thing is for sure, whenever a crisis is at hand, mysterious figures emerge from the shadows to restore order to the world.

Professor Henry and his wife worked for the Dawn Council, known for its research in cutting-edge technology, providing an endless and varied stream of high-tech products to government agencies and mysterious, anonymous clients. But when they finally finished developing the SMART-01, all this changed, as their new creation was more intelligent and powerful than any android the world had seen before and was designed so that once a genetically matched host controlled him, he could act according to the controller's consciousness.

The leader of the Dawn Council saw the potential of this technology for warfare and ordered the Henry's to transfer the technology to selected government agencies for a mass production program. The Henry's refused. After ordering their prototype One to destroy all of the experiment's data, the Henry's mysteriously disappeared.

To this day, little Alice has no knowledge of these events. All she knows and cares about is that this special robot has always been there to protect and accompany her and that he calls her Honey like her father once did while she affectionately calls him Jawhead in return. The only clue left behind by her wherever she goes. Finally, Alice decides to journey with her robot friend to track down her parent's whereabouts.

2nd Skill: Ejector
Throws Jawhead's closest target to a designated location, dealing physical damage and briefly stunning the target and enemies in the area the target lands. Prioritize heroes, and can also be used on allies, however, allies will not take damage.

Ultimate Skill: Unstoppable Force
Locks onto the enemy target, instantly charging to the target. Deals physical damage to the target and units surrounding them.

So that is all we have for the Steel Sweetheart, Jawhead, would you like to know more about him and the game, then stay tuned for more updates!
Next Post Prev Post