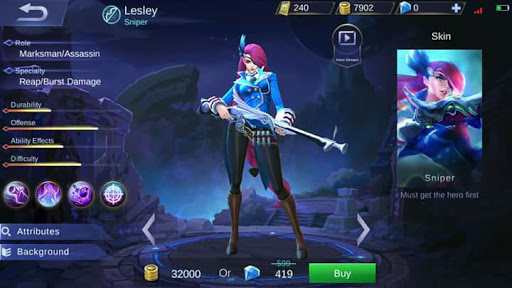 With Fasha given a glimpse of her appearance and what she can bring in the game, today we will discuss her other hero together in a future release. Today, we will talk about Lesley, the Sniper. Keep reading for this overview of her appearance, strong points, and her role.

Lesley will also be versed in stealth movements. Hiding in plain sight and ready to strike. She will cost 599 diamonds or 32000 BP with a 30% off the first week of her release. Today we will give a brief overview of the newest hero in the game, Lesley, the Sniper.

Lesley is seen in the hero overview of the game itself as she is moving and sneaking up on different cover spots in stealth mode until she releases herself in front of the crowd. Lesley, the Sniper has a long pink hair that reaches up until her legs. She has an eyepatch on her left eye and she has a blue feather donned to her head. She wears a blue coat and black pants with shin guards on it. Together with her weapon, of course, a modified blunderbuss with a scope for long range measures.

And as if one role is not enough. She has been given a hybrid role. She is both a marksman and an assassin. Those two combos should be feared as someone who can strike you from a distance with burst damage can be really deadly. So I am guessing a lot of people will be hyped for the release of this she-beast!

Because she is a marksman and an assassin, don’t expect her to have a strong durability level. Instead of that, her strong point is her offense and she can wreak havoc from afar with her guns. Her abilities will be useful in a pinch with this, her difficulty curve could be quite a handful but mastery proves success so train harder!

Lesley grew up in the Vance household, where her father presided over the noble family's security. During an attack by a rival family, Lesley father was killed. As the assailants approached the Vance household, Lesley took up her father's mission. Tears rolled down Lesley's cheeks as she fired shot after shot, each one taking down an assassin.

The final tear came as the final shot took down the last of the rival family's men. Lesley was adopted by the Vance family, with the patriarch of the noble house even putting their sole heir, Harley under her tutelage. Harley was a natural troublemaker, who used his talents in magic to cause trouble for the Vance household, only Lesley could keep Harley under control. Harley's troublemaker's streak was the last part of warmth within Lesley's conscience.

After hearing about how Harley had traveled to the dangerous Land of Dawn, Lesley follows along with her trusty heirloom rifle. After she found Harley through a long arduous journey,  she found the once immature young boy had changed through the numerous life of experiences he had gone through. She decided it would be best to have her adopted little brother train here, while she silently protects him from the shadows.

From that day on, all the monsters that were inflicted with Harley's magic would also be struck with black bullet. Stories of the magical youngster that was followed by a mysterious black sniper soon spread.

2nd Skill: Tactical Grenade
Throws a tactical grenade, dealing physical damage to enemies and knocking them back while she steps back a little.

Ultimate: Ultimate Snipe
Abandons her senses and captures all enemy moves in an area by her mind. Shoots out a deadly bullet, dealing physical damage, the enemy hit by the bullet takes extra damage if he gets hit by another bullet. The bullet can be blocked by another hero.