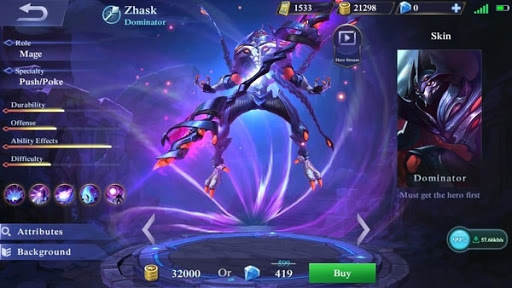 Zhask, since released have created waves of popularity within the player’s fanbase. Some say that he is a strong and overpowered hero that needs to be nerfed as it can dominate the game. But some think that he is a push-over and not much of a strong hero at all.

Today, we will show you how Zhask can truly dominate the game as his nickname said that he is the “Dominator”.

Positioning is always important for mages. Without proper positioning, you will be fodder for the ADCs and the other Assassins that will try to kill you.

A proper positioned Zhask will always be safe from dangerous situations and avoid being killed just because he is in the wrong area to be with. You as a Zhask user will not be feeding the enemy team as long as you know where you are, where you should be and you know that your position will keep you safe.

But positioning doesn’t only concern on the hero itself, it also concerns on your turrets. A properly positioned turret can make you untouchable and help you make the proper calls to victory.

For example, your turret can be put close to your team’s turret to make you untouchable. This would be attained if you know where the proper measure for the team’s turret target range, just before the limit, place the turret there so if you get focused, they will not only be met by one but two turrets, making you easy to kill them off.

Another way to be resourceful in your turret use is to use them as your wards. You can put them in a bush and make sure that the bush is warded so in case an assassin tries to gank on you, you will have your own little “surveillance device” so you could act before it’s too late.

Always be wary of checking your mini-map. It always gives out useful information. Especially, if you want to check out the enemy positions. Again, proper positioning is important in playing Zhask, don’t position yourself close to the top lane field if you see an assassin close to that location, it’s like you’re begging to be killed. But place yourself on the opposite side so they would have a hard time in reaching you.

Having great mini-map awareness can reduce your death toll, not only on Zhask but in the other heroes you can play that needs proper positioning.

Let’s admit it, Flicker is one of the best skills in the game. But should you depend on it as Zhask, probably not?

Flickering out only means you failed at #1, positioning. You should always be with your turret, not away on your turret. A properly positioned turret should always be close to you and is ensured to bring you creep score while being secured as well. So, should you get Flicker, sure but not entirely recommended.

Remember that Mobile Legends is a team game, it should always be played thinking that you have 4 more teammates at your side.

So always remember to trust in your teammates and always support in team fights. You have the power to turn the tide in your favor. An ultimate-charged turret can bring massive damage to your enemies so always keep that in mind when you have a team fight as Zhask.

This shouldn’t be always repeated and should be common knowledge in your mind as a player of the game. DO NOT SOLO ROAM ZHASK.

Zhask may be powerful once fed but remember that Zhask is a mage and is born to be squishy and aimed to be ganked to avoid being fed. Please don’t solo and the goal is to kill. If the objective is to split push through and your teammates have told you that they do as you are commanded to. Trust your teammates and be oriented to be victorious!


In the end, it’s still in the player’s aptitude if he/she can play Zhask effectively, these are just general tips on how to dominate as the Dominator! There are other possible suggestions and recommendations out there so if you have one, please don’t be afraid to share it down below with us!

With more news about Zhask, the Dominator and the game, Mobile Legends, just stay tuned!
Next Post Prev Post