-->
You are here: MLPH » Updates » Detailed Explanation of 8 Strongest heroes in Christmas Mode 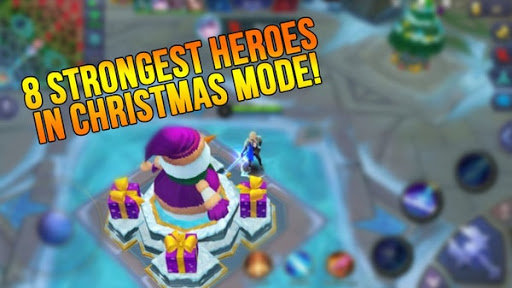 These are in no way in order because strength can be varied depending on a user, so without further ado, let’s begin!

A hero that may not be as much as popular as the new ones like Lancelot, Zhask, Helcurt and a lot more but don’t be fooled by her in the Christmas Game Mode as her powers are modified to her full potential

Alice when hit, will have 20% chance to proc her second ability.

What is her second ability? Her second ability gives her magical damage in an area and stuns them for a few seconds. So imagine if someone is focusing his/her damage to Alice, then most of the time, the enemy will get stunned because 20% chance is a high chance especially if the enemy is trying to hit her a lot.

A hero that has his fans asking for a rework or even a buff.

Well, for those who love Bane so much, they will have a fun time in the new game mode! He is considered a strong hero in this one because of his modified skills

Bane fans you might want to build Bane solely on damage, a little cooldown will do but focus on damage. Why? Because in the Christmas Game Mod, Bane’s critical has been amped up so in every second as Bane you can deal massive damage! With this, you can decimate foes with ease!

Be the uncanny support you will ever be because Bane’s healing is MASSIVE! It can bring massive support in a team fight when the team needs it. The chances are high that it can heal your HP to the almost full if not full, so if you want a damaging support in this game mode, pick Bane.

It’s fairly not noticeable at first glance but Bane’s ultimate does a mini-stun we are hit by the cannons. This is hard to see because it happens fast that you won’t notice it always. But take advantage of this by going all-out while they are off-guard because of the stun.

Here comes your reliable or unreliable fighter, Franco! He who hooks enemies to ensure a kill or two. If you think about the formal servers that he is already wreaking havoc there, guess what? It’s about to get wilder in Christmas Game Mode.

If you know how to hit the hook with Franco, then make yourself more powerful in Christmas Game Mode! Franco’s hook can reach the other side of the map! Yes, at the other side of the map, but it would be hard to hook that far so, the hook can reach locations that are far off the normal reach. This would be impactful if the Franco player is efficient so Franco would be feared if the player is great!

Franco’s Ultimate can bring massive damage to an enemy but what if those hits heal him, he would be unstoppable. Guess what? In Christmas Game Mode, they made it possible. So hack and slash all the way with Franco!

This futuristic swordmaster can do more damage in one here and in Christmas Game Mode, he becomes more deadly with his two skills modified


Flying Swords on Me (FIRST SKILL)

Saber’s first skill always involve those 4 swords flying around him and those who get hit take damage every time a sword collided with that. Well, imagine that doubled! Yes, Saber’s Flying Swords are doubled and would deal massive damage once hit, so when Saber starts his first skill, run away on it!

Saber’s second skill where you charge through an enemy will still stun for a few seconds. This will be useful for chasing an enemy together with your team! If you got tagged, you’re stunned!

This archer ain’t done in Normal Mode, she can make more damage to the enemy team in this mode, find out more!

Miya’s arrows always slow those who are in the area where the arrow barrage has happened but guess what, in this game mode, she will have more control over her freezing powers. Each arrow hit will mini-freeze her opponents, making her have more time to deal damage to the enemies!

Karrie’s abilities are not really touched in this mode but do not underestimate her in this one. There’s an ability that makes her overpowered in this mode and let us see if this makes her OP for you!

If you think Double Lock Mode is overpowered, then let’s mix it up! Let’s make it bounce! Yes, once you activate Karrie’s ultimate, she will not just only go doubling her attacks but it will also bounce. Imagine having a team fight and Karrie is just making her attacks bounce. It would be very massive and it will turn to tide to Karrie’s team!

How can someone forget our first hero in the game, Layla has one skill modified but it is a crazy genius!

Layla’s first ability is known for dealing damage for a short cooldown. Well, guess what, in Christmas Game Mode, she doesn’t need to cool it down if it hits an enemy, you can spam it! You can take down Turtle and Lord easily with Layla alone! Imagine what it does to team fights!

The one that finishes the list is not very popular like the first one, but don’t underestimate what this mode has done to her!

Her passive has a lot of damage now and because of that rebounding your skills will be useful in taking down the enemy team. Make it bounce and kill them!

The damage of her first skill has been increased and it has been rumored that the range is also increased making you hit the target more with your bird!

Targeting enemies have been troubling. You need to bind them in order to unleash hell on them, Odette in Christmas Game Mode, however, can still catch you! She got more novas for you to avoid, if it hits you, it binds you. Making the kill easier.

Her Swan Song will make your enemies’ escape hard and it will only be harder as Odette’s ultimate cannot be CCed, you cannot interrupt her from doing her ultimate, therefore you only wish to run before it’s too late and she has drained you of your life points.

It seems that this game mode will bring more interesting features as they are readying up for its release if you have more heroes that you think is OP, comment it down below and for more information regarding Christmas Game Mode and Mobile Legends itself, stay tuned!
Next Post Prev Post