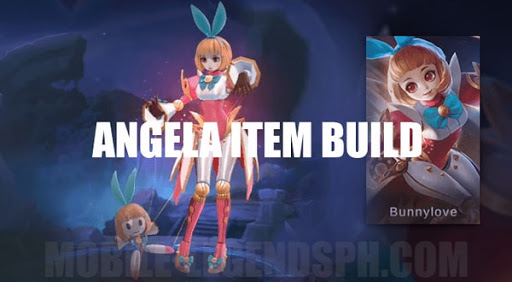 Angela is one of the greatest supports that the game ever implemented, there are more than one reasons why so.

She has good mobility at the start together with the passive so making escapes and supporting your teammates in a nick of time can be easier when you control Angela in the game. She has the fastest CC to get for two seconds.

Not only it adds a substantial amount of damage so that the carry can finish someone off, it slows down the enemy for the kill, how cool is that?

Her ultimate can easily reach teammates who drastically needs it and you can skip having the teleport spell in your spells as this can be an instant teleport to your lane and can be used to support teammates quicker.

Stacking damage with the first skill can help your carry take it down with the final hit. Angela is very powerful but all heroes have limitations and so does she.

Being a support, it is natural that you need to rely on your teammates to get the W, each time you play as her, to have a maximum potential ability, you need to have reliable teammates so that you can synergize with them to get the victory.

Angela can be pretty squishy so avoid going solo or fronting for your teammates, you are there to augment and support not to tank. Finally, after a magic build, you cannot have a burst damage to obliterate someone, well she is a support so maybe it should be a given.

Now for the real deal, for the item build, here are the items you need for Angela:

This item is the core item for Angela as you can set the pace once you have this item. The passive can help you have mana in the lane for longer periods of time and stay with your carry longer. Also, besides the given magic power and HP it provides, it gives you cooldown reduction so you can spam the first skill, Love Waves even further. Get this as fast as possible!

The passive is perfect for the support and every hero should always have boots. It also gives HP that is a must need for a squishy like Angela.

Armor to reduce the squishiness of Angela, mana so that you can spam more skills to help your team to win, crit chance reduction so you should not be one-shot killed. More cooldown reduction to spam the Love Waves even further and finally a passive that stack your Love Waves movement speed reduction so that enemies cannot escape your wrath together with your carry, of course.

More HP and regeneration for more survivability in the game, this item can also help the magic resistance of Angela to fend off the spells of the mages, and the best part is the passive where you get to have a shield, the shield can fend off burst damage so you can live longer with the shield.

Another item for HP and HP regeneration, you are now hard to kill with Angela at this point. Supporting your teammates by the passive of this item is great. They can get 10% more of attack and defense capabilities which can get your team rolling to victory. It’s your choice if you prefer to get this in the early game, but CDR is as important as HP and regeneration to help your teammates.

Finally, this time, you are not to be pinned down easily and eliminated by the team. Magic resistance to stop the mages from killing you instantly, more health points to stop those carries slaying you. And if that does not even work, you have the passive to be resurrected to either finish the job with your carry or escape and avoid giving the enemy the kill.
With these items, you can ensure that you have done your best as the support of the game and Angela is a tough, strong yet a great support in the battlefields, do you want to play as the support robot that can teleport to you?

Try Angela today! For more information about her and the game, Mobile Legends, stay tuned!
Next Post Prev Post