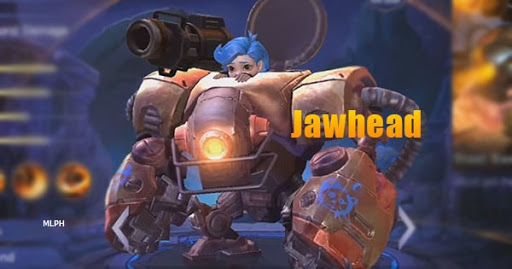 Jawhead is a great fighter that can deal high damage and support to their teammates and very useful in teamfights. He is a natural tank so we might as well focus on the damage it can deal.

He has a great crowd control and mobility and his passive is something to die for. These positives though can be hampered since he may be difficult to master but enough of that for a while and let’s get our items right first in order to have our odds better at Jawhead.

Rake up some kills and damage with the Bloodlust Axe at your disposal. Your skills are vital in the early game to deal some damage so the bonuses of this item will be very useful for you.
More damage is a bonus but +10% Cooldown reduction would be great so that you can use your skills earlier and faster, you can be more reliable in the battlefield with that on. Plus, this item also has spell vamp. Which lets you gain HP by dealing damage with spells, so it’s like life steal but with spells and since you are spell-hungry take it.

Since Jawhead has good mobility at the start of the game, you can skip the boots for now for this second item.
Dominance Ice gives you 700 mana, CDR, armor and more. And that’s not the best part. It has a passive that slows down your enemies giving you the time to spam those skills to your opponents away.

Now should be the perfect time to get some boots to gain more mobility in the battlefield.
Warrior Boots is a great way to go since you need to be more tanky for teamfights and to catch all the damage you may receive from the enemies. The boots also have this neat passive where you gain armor for every attack received which is great so that you can deal more damage while taking some.

This item gives you high damage output, more attack speed and a passive that can give more damage to an enemy that got into an abnormal state which includes effects from crowd control.
Since Jawhead has crowd control, he can benefit from this. Alongside the power of attack speed and damage. Prepare to annihilate even further with the Steel Sweetheart.

Ahhh, tanking the game. Taking all those damage and trying to stay alive for your teammates to deliver damages from your enemies. But armor isn’t the only one you should be worry about.
How about those pesky magic power that your physical armor cannot protect? Well, Immortality gives that and more. Magic resistance is part of the deal in this item.
With additional HP and an awesome passive that resurrects the hero you are controlling, in this case Jawhead and a chance to wreak havoc once more or retreat to prevent them to score a kill and give the enemies a leverage. Take this item for more survivability.

And now for the pièce de résistance, this item has two useful things. First, it gives off a whopping +1550 HP for the hero.
Ultimately, making him a tough as nails tank as it could be. Jawhead would be harder to kill in battle. Jawhead’s a figher means he is meant to deal damage but with his natural tankiness in his initial build, you can go straightforward to that route and make your teammates be happy with your presence in the game.
Not only that but if you do manage to get kills or assists, you will get 20% of regeneration in your HP in a fast time with a fast cooldown as well, this in mind, we can see that if we help fend off the enemy team, you can guarantee your survivability.
Ofcourse, there is no single formula in winning a game, but using the tank method for Jawhead would be a great way to win the game as it is always said that those who can play great tank heroes in a teamfight would help their team win and that’s what we always aim for right? Win!