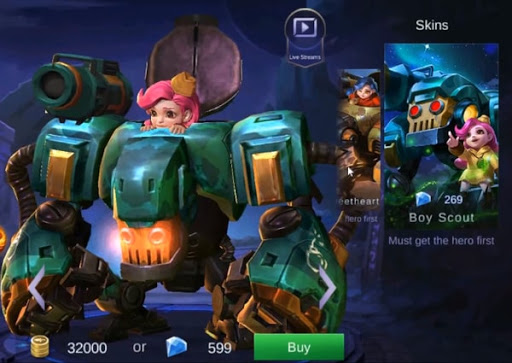 From an old and rusty design of Jawhead in his initial skin, the Steel Sweetheart.

He now has a new skin that will make him look fancier and styled for battle. Presenting the “Boy Scout” skin. It will have changes to the appearance of Jawhead and the girl which are pretty noticeable.

First, the girl in the original skin has blue hair and a reddish shirt that she wears. Meanwhile, in the new skin of Jawhead, she has a yellow shirt and a pink hair which is a slight change for the girl. Meanwhile in Jawhead himself, he has a new color scheme.

Jawhead has now a fatigue design with forest green is the primary color for Jawhead and orange as the secondary color scheme for Jawhead. Also, instead of having a single eye on the original skin.

He gets the upgrade by getting 2 eyes and 4 rectangular holes that represent a mouth. He became greater in appearance that we will see if these attract the players who love Jawhead to buy the skin.
Hero: Jawhead - Boy Scout
Price: 299 diamonds.