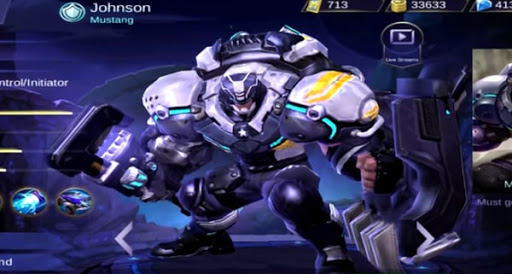 According to Mobile Legends Patch Notes 1.2.50 Mustang - Johnson will replace the old Johnson. If you already own the old Johnson, you can use the new one. Purchase price remains unchanged

When Johnson's HP is lower than 30%, he will generate a shield, absorbing an amount of damage based on his armor. This effect has a cooldown.

Throws a spanner in the specified direction, dealing magic damage to enemies in its path, and stunning enemies in the area it lands.

Raises his shield, dealing continuous magic damage towards in a fan shape and slowing enemies. Basic attacks and Deadly Pincers can still be used while this skill is active.

Ultimate: Rapid Touchdown
Passive: Increases armor.
Active: Johnson jumps up and transforms into a car, accelerating increasingly. Teammates can get in the car when it's moving slowly and then rush toward along with Johnson.

Only one teammate can fit inside at a time. The car will explode upon hitting an enemy, stunning the target and nearby enemies and dealing magic damage according to the car's speed.

After the explosion, the ground will be electrified, slowing and dealing magic damage to enemies caught in the area.

When the car is going slowly, you can tap this skill again (Throttle) to move faster. when you are going fast, you can tap the skill (Brake) to stop.

Do you anticipate the Johnson rework and plan to play him soon? For more updates about Johnson and Mobile Legends, stay tuned!
Next Post Prev Post