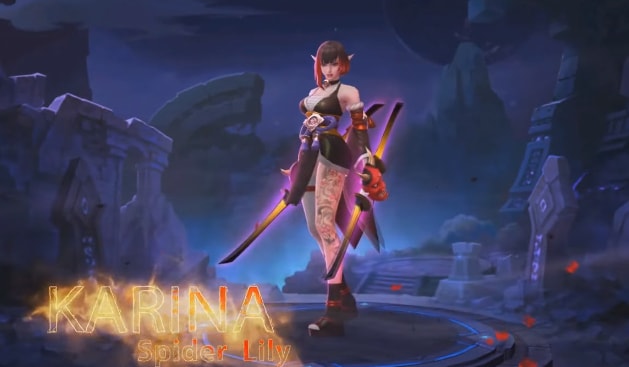 In her hero preview, her two swords first appear, it is dual-bladed at both ends and has a devil face in the middle.

After that Karina lands in the middle of the swords and catches it and then she does a flurry of sword moves before she poses.

That’s what hero preview is. Mobile Legends has given us a trailer to even hype us more for this skin.

Her first skill would make her swords glow that would change the swords’ color from black to golden and it glows.
Her second skill then would make a golden slash effect that would be different from her base skin’s skill effect.
Her ultimate would make two orange slash effects and would have a feather animation as well behind Karina.
After the appearance of the skills, the trailer then shows a gameplay which proves that the skill effects shown to us are also the effects, you will see in-game.
Finally, it ends with a moving splash art of Karina saying that the Spider Lily skin would be available next week.

And that’s all we have for now for Karina’s new skin, Spider Lily. Would Karina fans buy this skin for their main? Are you excited to try it out and play Karina?

For more information about Karina, her skins and the game itself, Mobile Legends, stay tuned!
Next Post Prev Post