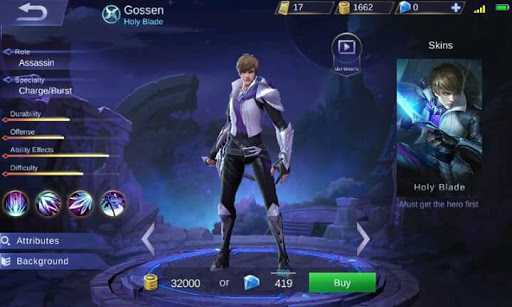 Gusion, the Holy Blade is an assassin hero that has a specialty of a charge/burst skill types. He has a brown hair that covers his forehead. He wears a black suit that covers almost his upper body with black pants to match it. He also wears a blue shirt and a white vest on top of the black suit with shin guards, shoulder guards, and knee pads. He wears a belt in the middle with a sword that will glow according to his portrait.

According to the overview meters on the left side of the hero preview, as an assassin, he will have a decent durability, his durability is even marked higher than his offense which is weird for an assassin but his strong suit will be ultimately on his ability effects as it has the highest rating on his preview.

1st Skill: [Sword Spike]
Darts in the specified direction, dealing physical damage In the first target hit. Use again to cause physical damage to the target and reduce their movement speed.

Passive: [Dagger Specialist]
Each spell cast grants a rune. After stacking several runes, the next basic attack will deal additional damage.
If you want to play Gusion masterfully, you must master the skills and the possible combos that can go with him. He might be slightly difficult to handle but with the right tactics and skills, you can play him successfully.

That’s all we got for now for Gusion, the Holy Blade. Want to know more about him. Wait for the further announcements for his release in the formal servers and as always, stay tuned for more updates on the game!
Next Post Prev Post