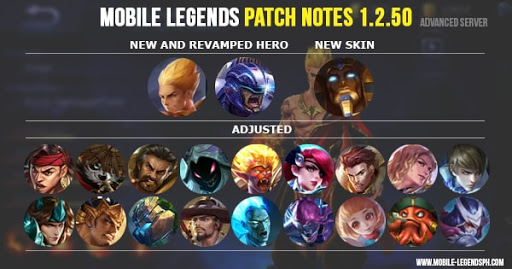 I: New and Revamped Heroes

Deadly Poisoned Stinger: Poisoned stingers now disappear every 8 seconds, instead of all at once. Reduced the number of basic attacks required to reach 5 poisoned stingers (reduced from 5 attacks to 4).

Optimized the special effects of Clone Techniques. It's now easier to distinguish between Sun and his clones. Enemies will still see the same thing.

Fixed an issue with Fearless where additional delense was not being added.

Phantom Execution: Fixed a problem where this skill was inflicting a small stun.

Zilong
Fixed an issue where Zilong's passive was not disappearing after he died.

Optimized a camera shaking issue when using his ultimate skill.

Optimized the pathing of monsters and lords after being blocked by stone walls.

Fixed an issue where the enemy's position on the minimap was not correct after Yi Sun-shin used his ultimate.

Fixed a problem where Gord's actions were not being played properly when releasing his skills.

Charge: Fixed a problem where this skill would sometimes fail to deal damage when Saber had no Mana.

Puppet-on-a-Strung: Fixed a problem where puppet attachment was not being severed after death.

Rum: After drinking rum, the duration of his toxic spray has been reduced from 3 seconds to 2.5 seconds.

Shadowblade Slaughter: The fan angle of his five throwing daggers has been reduced from 90° to 70.

Incandescence: Can now dash in a specified direction within 8 seconds of casting.

Quad Shadow: Fixed a problem where shadow would be blocked by minions and jungle monsters.

1. When dragging and dropping the minimap from the top-right corner, it will show your current field of view as a white box.
2. Re-adjusted the Brawi Mode minimap to make it more like the actual game terrain.
3. Added a new option to the hero seiection interiace chat shortcuts: Heading to turtle!

3. Optimized the game's logo in sharing Images In various places throughout the game.

4. Gender options have been added to the character creation process. (You are new free to keep your gender anonymous.)

6. Incremental download tips will now display progress according to the total amount of resources that need to be downloaded for the current version.

7. Hero and skin Trial Cards can now be used in bulk.

1. Fixed a problem where [Fanny] would disappear when using skills while a skin was equipped.

2. Fixed a problem where sound would not stop playing when watching [Zhask] in referee or replay mode.

3. Fixed a problem where opening the minimap to send a signal would cause issues with the screen drag function.

4. Fixed a problem where units summoned by [Sun] and [vexana] were not inheriting the corresponding item attributes.

5. Fixed a bag problem where, if your inventory was full and you used an Item, the item interface would be stuck to the top of your screen.

6. Fixed a problem where [Roger]. [Lancelot], and other heroes invincibility skills were not playing properly during live streams.