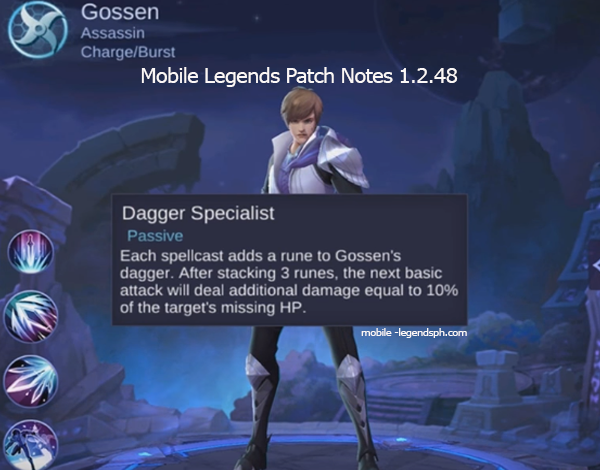 I: New and Revamped Heroes

Bane will replace the old Bane. Players who have already purchased the old Bane will be able to use the new [Bane]. His purchase price will remain unchanged.

JawHead Skin - Boy Scout, 269 Diamonds
JawHead and the Boy Scout Skin will be available in a new gift pack!
Launch Week Discount 30% off!

Bane skin- Count Dracula
Will be 30% off in its first week — stay tuned!

Ejector: Optimized the description (select a nearby target). Range increased by 30%.

After listening to all of your suggestions, and considering Gussion‘s background story, we‘ve changed Sword Spike and Shadowblade Slaughter from physical damage skills to magic damage skills, and Gussion's attributes have been adjusted accordingly. Please remember to change your Emblems and equipment sets, too!

Sword Spike: Slightly increased the width of the first stage of this skill and removed the slow eﬂect from the second part.

Dagger Specialist: Additional damage adjusted from 10% of the enemy's missing HP to 15%. Added a new effect: Heals Gussion for 80% of the damage done upon landing his passive.

Fixed a problem where Sword Spike and Shadowblade Slaughter were not being blocked by LoIita's shield.

Fixed a problem where Crab Claw Cannon was not being blocked by Lolita's shield.

Quad Shadow: Fixed a problem where hero direction and movement direction were out of sync. Optimized skill tips are shown after consuming shadows.

Repaired a problem where Frost Shock's special effect was not functioning.

Fixed a problem where Brutal Massacre was unable to interrupt some channeled skills.

Optimized the skill icons of Bloodthirst and Lethal Counter.

Cyclone sweep: You can now initiate other skills when this skill is in progress. Using another skill will interrupt Cyclone Sweep.

Fixed a problem where the Campus Youth skin would sometimes disappear.

The Bane’s Booty event has started! Complete special quests to collect Treasure Map Fragments. and you can get packs containing a variety of rewards, including the hero Bane, Bane skins, and Tickets (the same skin rewards will be available on all servers).

a. Event Description: In this event, there are a total of 6 islands, and each island has 6 to 7 separate quests. Complete the quests to obtain Emblem Packs and Treasure Map Fragments.

b. Unlocking Islands: After collecting a specified number of Treasure Map Fragments on your current island, you can unlock the next island, granted that the island's unlocking time has arrived.

c. Gameplay: In this event. the more Treasure Map Fragments you collect, the more rewards you'll get!

d. Receiving Rewards: You can receive your rewards from the progress bar at the bottom of the event interface. Tap to receive.

Odette’s Puzzle - During the event period, you can get Emblem Fragments, Hero Trial Cards, and the permanent hero Odette!

a. Event Description: This event has 7 phases of quests. Only one phase can be completed every day. After completing all of the phases, you can get the permanent hero Odette!

b. When the event begins, only players with an account at least 8 days old can participate.

c.If you already own Oddete, you’ll get 10,666 BP for completing all the quest.

d. For more details on the speciﬁc start time at this event, please refer to in-game mail notiﬁcations.

1.Added a streaming assistant display and hide switch to the in-game broadcasting interface. You can conﬁgure your settings in your Stream Info and Livestream Channel settings.

1.Fixed a problem where Skin Trial Cards for time-limited event skins could not be used in the hero selection interface.

2.Fixed a stream spectator viewing mode issue, where heroes who were supposed to be set to invisible were appearing on screen.

There you got the Mobile Legends Patch Notes version 1.2.48 for the advanced server. For more updates, Stay Tuned!