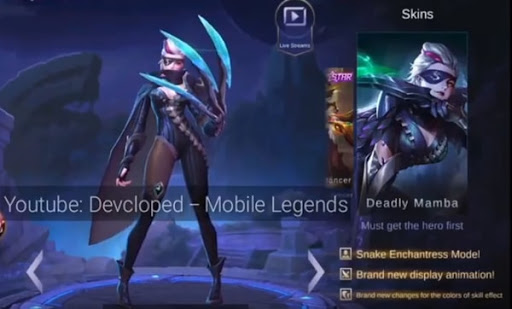 The sexy and deadly femme fatale has a new skin and it will drive her fans to get it because it has a lot to offer.

First off, let’s look at the appearance of the assassin. She doesn’t have a cap on her new skin revealing her white hair. Her black suit also only has a single leg to be covered the other one is shown with a brace at her knees.

She has the look of an assassin with a mask that covers those surrounding her eyes and her claws are colored green. Deadly enough for those foolish on planning to take her down. She also has a new black cape along with it.

Changes in her abilities are the following:

Her first skill strikes are now colored green rather than red.
Her second skill which produces an Area of Effect smoke bomb is now colored green that looks like a noxious gas.
Her ultimate, like the first skill, changes the claw effect from red to green. Not much of a change but it still adds something new to Natalia.

So if you are a fan of Natalia and you want to get every skin possible. Get this one! For more updates on Natalia and the game. Stay tuned!
Next Post Prev Post