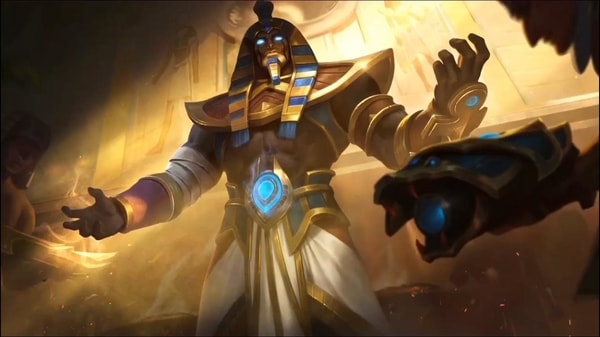 Have you ever saw or read the Egyptian Mythology?

He is a half-dog and half-human-like figure that wields an axe and is the god of the afterlife in the Egyptian mythology. And the developers thought about Roger being a wolf and all, it could work so the Starlight skin for this month of February would be Roger in his Anubis skin!

No game play of it yet as it is not yet to be shown before February, although his skin animation is dope.

First off, you will see Anubis entombed with three sand tornadoes close to him, suddenly the entombed Anubis frees himself, and tries to get close to the screen but the sands pull him apart until the sands washes away and Roger began to control his Anubis side and his weapon show up.

For those who love mythology, this is a big thumbs-up for Moonton for adding this. Hopefully, they add more mythological references.

Also, if you buy this month’s membership you will also get Karrie’s skin Dragon Queen. So if you want to avail two skins in one month, get this month’s Starlight Membership!

For more information on the Starlight Membership, the skins and Mobile Legends, stay tuned!
Next Post Prev Post