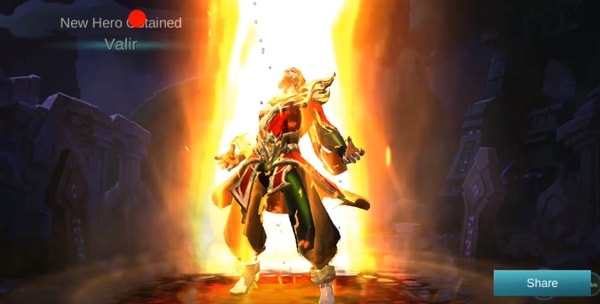 Valir, the Son of Flames

Legend has it, that at the end of the western desert, there lies a beautiful and rich country. This fabled land is where Phyursfrom. From the very first day at the magic academy, Phyrus' extraordinary control over the arcane was clear for all to see.

Gord, who was teaching arcane arts that time, saw a little of himself in Phyrus and began to teach the most coveted secrets of the arcane to his inquisitive pupil. However, Gord came to regret his actions, disturbed by the negative energy that began to radiate from Phyrus, and his violent tendencies. Eventually, Phyrus started combining the ancient flames spells from his desert homeland with arcane power to create a unique form of arcane flame magic.

Gord felt he had betrayed himself, allowing his pure arcane wisdom to be tarnished by theses wild flames from an unknown land. Enraged, Gord attempted to remove the power of flame from Pyrus body Phyrus resisted with all his might, and half of the academy was destroyed in the ensuring battle. At the end of the fracas.

Gord was left feeling somewhat proud that Phyrus arcane flame magic cloud holds up against his own pure arcane power. In the end, Phyrus left the academy, and Gord began working on creating a flying machine fueled by arcane energy, intent on searching the world for a new apprentice.

Passive:  Arcane Flame
Condenses arcane flame over 20s, after which your next "Burst Fire" or "Searing Torrent" can be cast without a cooldown.


That's all for the new Mobile Legends mage Valir or Phyrus, for more details about this hero, Stay Tuned!