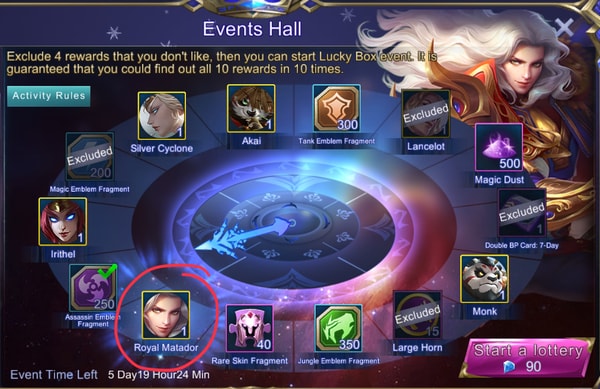 Microtransactions have also been a bane of other players as it contains a lot of things that can be considered bad for the other gamers that don’t spend their money on a game.

The issue is that some players wish for great things like skins and other cosmetic items that are only available in the loot box system in games.

Loot box rewards are hard to achieve especially if the rewards are marked as rare in the game. But let’s talk about Mobile Legend’s Lucky Boxes.

Lucky Box is a loot box-like system that works like a roulette where there are 14 rewards that can be won.

You can choose up to 4 rewards that will not be selected by the roulette. Then you spin the roulette and you get a reward. You can start with a few diamonds and every time you get a reward, it increases. Overall, spins can cost 4250 diamonds if you spin all 10 times. Which can cost a whopping amount of $100 or $99.95, it doesn’t even matter. It’s a big amount.

Now there has been a controversy that Mobile Legend’s Lucky Box system is a scam or it is rigged so that you will get the best reward at the last or second to the last. Although a lot of people still argues about that theory, there have been videos, commentary and other media discussing that issue.

Despite others having a different scenario or luck, like getting it 4th or even 7th time. It has always been shocking to see more videos on YouTube showing that they get lucky boxes at the last or second to the last of their spins, that’s why people believe that it might be rigged.

But to be careful, just remember that you need to control your usage of money for in-game purposes. Not all of the items in the game, you need to buy. It’s all about what you just need in the game.

Maining a champion and you want that item, sure. But hoarding the lucky boxes is never a go-to option unless you dare to waste your money away because you collect rare skins.
So to a quick recap, lucky boxes are rumored to be rigged and thus called a scam, however, no new evidence has been shown to prove it except the YouTube videos that show the rare skin obtained either to the last or second to the last. So, it is still a debate whether it is indeed a scam.

What do you think? Is it a scam or it’s just poor luck that the ones calling it, for more information about Mobile Legends, stay tuned!
Next Post Prev Post