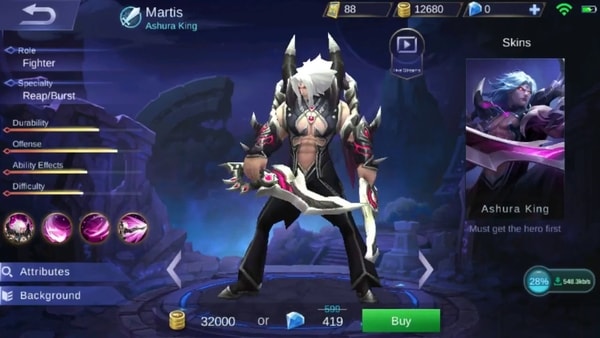 Martis fighting style would consist mainly of offense and durability. Despite these two sometimes clashing and has one style incredibly lower than the other, Martis has these two to capitalize from.

The offense as he is capable of damaging enemies faster and deadlier as it goes by. His passive does that and it reaches up to 60%.

His ultimate can also deal true damage if your enemy has below 50% health so Martis is really a deadly killer. But another option will be his durability, you can make him a bruiser to withstand strong blows from the enemy.

So there would be two options to go to. Let’s begin with the first one

OFFENSE is the best defense

This build is the one usually played by the others. It lets the offensive capabilities of the Asura King flow. With the mix-up of more attack speed and critical chance. Martis would be a force to be reckoned with and only by focusing on him will you stop him. However, we are here to know about this build so let’s start right off with:

This is standard for Martis because it works perfectly for him. Either offensive or a bruiser build for later, this will be used most of the time. Aside from the attack damage and the cooldown reduction, it comes with an amazing passive which makes you spell vamp, or life steals through a spell, specifically in this item by 20% which is needed for Martis’ survival, so take this to start off your game and to stay longer in the lane.

There is nothing more fun than making sure that you stay ahead or close to the enemy you are chasing, with Swift Boots you can easily get to them due to its movement speed. This item has another use. Escaping as much as you don’t like running from a fight (I am sure Martis does not want it.) will be easier with this item, so take it and never let your opponent outrun you.

Another staple, as it gives more attack damage and it offers a critical chance, crits are vital for every offensive player as it makes the killing easier. The base crit chance is 25% but it also has a passive that gives off +40% chance, making it a total of 65% which is pretty high already. Another reason that this should be both at the offensive and bruiser is that the passive lets you deal more damage on the one that got hit by your critical hits, making it a lot easier to kill them off. This item has more pros than cons if it has one. So buy this one!

The three necessary boosters are here, more damage, critical chance and attack speed, with another great passive as critical strikes deal more damage and speed by 2 seconds. It will be like a sudden burst of power which will cause you to decimate enemies faster. As an offensive player, you couldn’t ask more for this item, so, by all means, take it.

Wings of the Apocalypse Queen

It may just give off a measly amount of attack damage but it gives you more HP to become a little bit tanky to endure damage from enemies that would most likely focus you, to avoid you wiping them all out. The passive is a great way to come back too. Gives you more defense, both in physical and the magical aspect which is great to survive more and it gives you 10% when your HP drops at 10%, you will really need this to survive the late game.

To survive the late game, you need to endure all those hits and be more resistant both to physical and magical damage so this item would be great for you, 800 HP and 40 magical resistance are not bad at all. Together with its passive, to resurrect you and give you off a shield, you can RISE to the occasion and wipe them all out.
Now that’s all done, let’s move on to the Bruiser build.

Now, bruiser’s definition is that it can absorb and take damage while at the same time, deal and inflict as much damage as possible. Martis already has the durability to become one so if we really want to go that path, then here is the build for you.

Explained in the offensive build, but bruisers also need damage and this would be a perfect start build for Martis to get his sustainability and damage high at an early level of the game.

A bruiser needs its armor to withstand damage from the enemy heroes, therefore, with the addition of Bloodlust Axe, you will need now more defensive items which one that gives armor and magic resistance. In Warrior Boots, you get more armor to defend yourself and a passive that increases your defense as you get hit more. So to start the bruiser build, take this one after Bloodlust Axe.

Explained above but to add a bruiser with critical strikes can cause problems with enemy bruisers as it will cut down their defenses as it deals tremendous damage. So take this as well.

This item fulfills what a bruiser needs, attack damage to deal damage and magic resistance to avoid those pesky mages draining your life with their magical ability. This item would make you stay longer on the battlefield without the worry of mages killing you off fast. You will gain more dominance in the game and not die easily in the hands of mages in the mid lane. Take this in order to get more powerful.

This is perfect for tanks and bruisers as it gives off more health points and armor for physical attacks and more HP regeneration so you could recover and get back to the fight more. These stats are enough to earn its spot on the list. The passive is also great as it reduces attack damage that you get from the enemy by 6% and it stacks, making you harder to kill in the mid to late game phase.

It works like the Demon’s Advent as it gives you more stats for the bruiser build. More HP and now rather than armor, it gives you magical resistance for magic attacks and HP regen for sustainability. Aside from those cool items, it also gives you a shield that grows as the match is still on. So this would finally complete your build and rule the game by being hard to kill off.
See Also: Martis Skills, Abilities, and Background Story

Either this build will help you become an offensive wrecking machine or a fighter that will stand the test of time by killing them off slowly but surely as a bruiser who is so hard to kill whilst dealing damage.

That’s all we have for now for our Martis Item Build. Which path are you going for Martis? For more updates about Martis, Item Builds and other news regarding Mobile Legends, stay tuned!
Next Post Prev Post