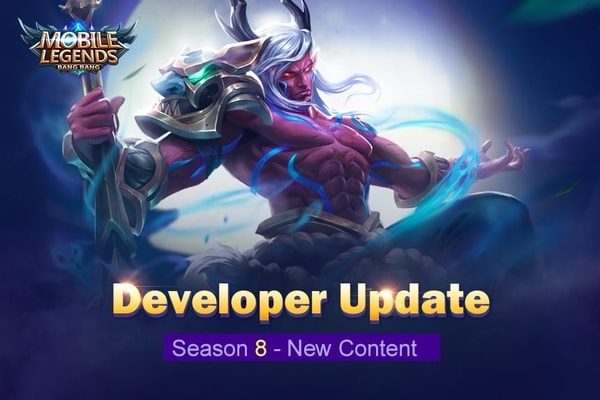 Season 8 would be expected to arrive at the first week of April and with that, there would be a lot of changes happening and we would not like you to be the last one on the news.

There are various changes that we wish for you to see to prepare in order to be in the top. Well, let’s not keep you waiting and here are the said changes.

There would be changes in the draft mode where it would impact the ranked gameplay and the basically the mode itself.

Bans in the Draft Mode would be changed from 2 to 4. This would mean a lot of bans and counterplays for the different enemy heroes that people may be annoyed or hard to counter. This may affect the ranked mode insignificantly.

You can also have a selection of favorite heroes in a special tab where you can select it immediately rather than scroll through a lot of heroes that you may not like using in the draft mode, this way, you can select the heroes faster and more efficient.

There would also be new battle spells that you can use in order to diversify your battles in the game.

These would be the following battle spells:

Iron Wall would help you reduce the damage being taken from the tower once you activate the battle spell, pretty good against the heroes that would often tower dive to secure a kill or those who love to harass enemies.

Aegis provides a shield that will block enemy attacks. This will be essential to the bottom lane as they need to protect each other in order to succeed in winning the lane. Furthermore, having Aegis will have both you and your teammate to have a shield making it a great item for team efficiency.

Weaken will now be prioritized in the strongest among your opponent, which may be useful to render them useless and turn the tide in your favor.

The old ranks of Season 7 will be adjusted to this Season, for more information on where would you rank, please check our article about Season 8 Rank Inheritance in Mobile Legends.

The Lord will now have an adjustment that would help the underdog team in their favor. The Lord now is capable of a ranged attack which may let the Lord live a couple more with a ranged attack meaning, it can deal damage from afar and now it has an increase in a range of its knock-up ability, making Lord a little bit harder to kill.

In response to some of the complaints and comments of different people about the heroes of the game either being too overpowered or underpowered, the developers have listed some of the heroes they are planning to rework before the new season starts and here is the list:

Kagura has been very popular with the players. But with great popularity comes with great ban rates and Kagura is not a stranger to this kind of things. With these factors in mind, the developers took a look at her skills and they have decided that they would rework her Seimei Umbrella Open Skill. This skill according to them is too confusing because it is used either for escape or rushing enemies and its range is too long so in this upcoming season they plan to adjust the range of the skill.

She has been reliable in the games and people have started to love her ever since her release but the problem that is she steamrolls in the early game. Even though, that is reasonable for her to be strong in the early game as it may be her playstyle, her range and ability to abuse squishy enemy heroes may be the problem, in this case, they will have to adjust her mechanics and quirks so that she won’t lose the damage output but reduce her bullying power on squishy enemies.

Chou seems to be popular of the normal games but in the ranked games, he is basically ignored. So that’s why they are planning to adjust his skills in order to be stronger and they will be trying it out to make sure that Chou is interesting again.

This will be somewhat big especially if you are playing ranked a lot. But as always the developers are listening to your inputs so if you have inquiries, comments, and suggestions, just list them down. For more information about changes in Mobile Legends, stay tuned!