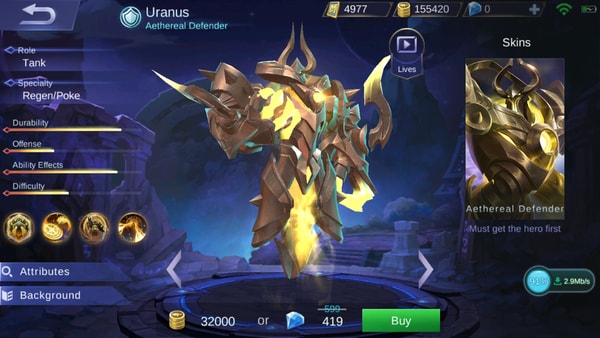 The Celestial Palace - Legend has it that this city floating above the skies of the Land of Dawn was once home to the Gods. It is also said that this mysterious place holds the key to ruling the world...

Eons ago, the ruler of the celestial place used the technological secrets of the ancients to create Uranus and commanded his creation to guard the city and wait for the emergence of a new ruler.

When scholars from the Land of the Dawn found and opened the gates to the Celestial Palace, the battle between the Dawn Zenith and the Dark Abyss quickly spread throughout the realm,  disrupting the quietude of the ancient city.

The two camps sought to occupy the Celestial Palace as a symbol of victory, their heroes unleashing the full extent of their power, and finally reaching an impasse.

The massive energy released throughout incessant battles eventually awakened the ancient city's defense system and was converted directly into lighting power which fed and reawakened Uranus, who lay dormant in depths of the Celestial Palace.

Leave now, intruders! he roared upon awakening and then charged to the battlefield, fueled by lightning, aether, and is now ready to fulfill his destiny.

His goal -- to expel these savage intruders disturbing the tranquility of the Celestial Palace.

Uranus absorbs the energy generated by attacks made against him to strengthen himself, regenerating 3-10 HP per second for each stack, over 8s. This effect can be stacked up to 20 times. Maximum stacks are increased to stacks at Lv. and stacks at Lv.

Uranus releases two energy spheres that orbit around him, dealing 125 (+30% Total Magic Power) magic damage to enemy targets while reducing their Physical Attack and Magic Power by 15%, and their movement speed by 40% for 2s. Each stack of Radiance increases damage dealt by 3%. Each energy sphere can only deal damage to the same target once.

Uranus generates an energy shield that absorbs up to 400 (+200% Total Magic Power) damage for 4 and grants him immunity to slow effects while increasing his movement speed by 30%. this shield deals 300 (+150% Total MAgic Power) magic damage to nearby enemies when broken, or at the end of this duration.

Tanks are usually needed in every single game to absorb damage and make sure that enemy attacks are being fended off against the carries of the game.

To avoid carries from dying, the tanks step it up in order to block off the enemy and support the carry and secure the kill, like what the saying goes: “Tanks for the carrying”.

We will discuss a build and guide for a hero that can be a great tank if built correctly, and that is Uranus.

Uranus is a tank that can be reliable in a team fight so good, that it can also be his fatal flaw. Without his teammates, he can be hard to use with.

His skills are reliant on them, meaning you need to make sure that you have mana when a team fight, so it’s also a con for him.

But don’t take him for granted, he is a natural tank thanks to his passive, his regeneration rates are crazy that you should abuse it.

He can initiate a fight well so his teammates can secure and win the team fight. He has great CC or crowd control that can help your teammates stop a fighter or an assassin getting through your carries. Alongside with this is that he is also strong against a certain CC and that is slow.

With his second skill able you to be invulnerable in slows, you might have a great time to rush in with your teammates to make sure their carry is dead and succeed in the team fight.

With that in mind, you might need to know a build in order to accomplish this, well here is the build that will be useful for your usage of Uranus:

Start off by fixing your mana-reliant needs with tankiness and cooldown reduction in its arsenal.

Dominance Ice gives more than armor, mana, and cdr. It has an awesome passive which can help your team mow down the enemy with the passive lowering down your enemy’s movement speed and attack speed. Your presence will be known once you get this build to get this first to establish dominance as Uranus.

Regeneration is an important aspect for longevity and survival throughout the game. Uranus is a tank, needing health regeneration to continue warding off enemy attacks and invasions.

However, like what we said earlier, his potential is based on mana and skill usage. So you need mana regeneration as well. Boots of Tranquility offers both so get them in order to be more effective in your match,

Another regeneration item. Alongside with its health increase, the HP regeneration of the stats and its unique passive is useful to sustain and contribute much longer in attrition fights.

Cooldown reduction is worth mentioning in this one as you will need to use spells often and finally, every tank needs to counter both physical and magical damage, Oracle gives off magic resistance so it is pretty useful for him as well. Now that you got your core builds in Dominance Ice and Oracle, let’s go deeper to items that will be extremely useful as well in the middle to late games.

This item will make you have more health and become tankier in the battlefield. Every team fight, you will survive longer with the massive health addition of 1550 health. Pretty big, and it is much needed for a tank like Uranus.

Also, the passive helps you regenerate more health as every takedown whether it is a kill or assist will ensure you gain 20% of your HP so better be there whenever a team fight is up to use this item and win the team fight for your team.

Make them fear you more as you need to be killed twice with Immortality. This beast of an item will make you more dangerous as you can CC them and you cannot be CCed easily. Heroes that can use CC is not suitable to be alive in the team fight as it can hinder the team’s chance of winning. So imagine, you needed to be killed twice by the enemy is a scary thought for them. This item gives health, magic resist and of course the ability to be resurrected back after being killed. However, you need to make sure that you use the active in times of need and not in times of greed.

Finally, make them regret hitting you early with Blade Armor. They will need to take you down early because of your crowd control but they will find it however difficult with this item.

As it gives you more armor and more armor, meaning you can negate more of their damage but this is not the best part of the item, this item has a unique passive called “Counterstrike” which turns your enemy’s physical damage to be hit back to them as physical damage every time they auto attack you.

Deadly as it sounds, this item usually is just brought up in the late game when you have built the first five and the battle is still heated up.

This will make the enemy heroes think twice of attacking you first as the carries of your team can use this to make the enemy weaker since they have taken damage already with this item’s passive.

Within the capable hands, Uranus can be a strong tank and even a support hero.

Supports are usually those with CC and are usually tanky as the attack damage carry usually demands protection against the enemy team. So Uranus can be used as a support as well.

But the bottom line is, with great regeneration rates both from health and mana, with cooldown reduction you can spam skills with and the health and armor boosts you got from your items, it is enough to say that Uranus with those items, can be devastating and with the right hands, make them game very easy for everyone that it is in his team.

Do you want more item builds and guides with the heroes of Mobile Legends? To know more.
Next Post Prev Post