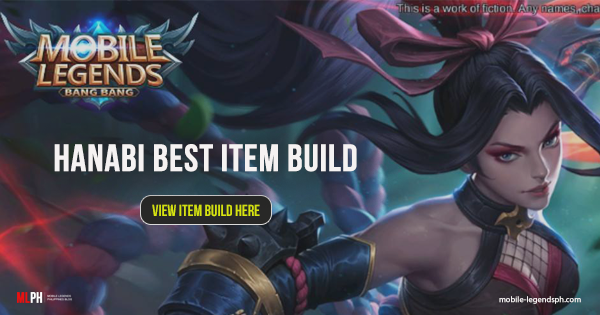 First, let’s talk about Hanabi with a quick and brief description.

Hanabi is a marksman, although some people thought first that she will be an assassin with her high burst capability but that is why she is special, she has burst and regeneration as her specialties, a pretty deadly combination to be with.

As Hanabi, you should rely on her offense as this is clearly the weapon you need in order to achieve victory, but you will also need the combination of her abilities to survive and win the clash.

Points of emphasis are Hanabi’s Passive and First Skill.

Her passive grants her the power to convert the life steal she can receive into a shield as long as her health stays at full health. Also, while she has a shield, she is immune to crowd control, a great skill to have as carries usually get CCed to kill them off immediately.

Her First Skill’s passive makes her have life steal, the skill you need in order to proc the passive even without items and other things necessary. However, items make or break the hero so let’s discuss the items that we think is best for Hanabi.

The typical items for an attack damage carry are damage, critical strike, movement speed and life steal, these items make an ADC like Hanabi more deadly, lethal, mobile and grant sustenance to stay longer in lane.


Items that we can recommend for Hanabi:

Start off with a bang with Berserker Fury. This is a must-have for ADCs and Hanabi is no exception.

With the stats given like +65 physical attack and +25% crit strike chance with the unique effect of +40% crit damage in conjunction with its unique passive, Doom, that lets the crits deal more physical damage.

With these statistics and explanation in mind, this lets you kill off enemy laners easily with just auto-attacking them together with proper combination of skills. You will definitely snowball early with this item.

It is a boot made for ADCs, with the given +15% attack speed and of course, the +40 movement speed, it is a staple so that you can be mobile and deal damage faster against the enemy heroes.

This item is perfect for Hanabi, it synergizes with her kit well and gives you the basic necessities for an ADC.

Let’s round up what Haas’ Claws brings. First, it gives you +70 physical damage which is big and deadly already but there is a unique +20% life steal which will help you build up your health back and give you a shield as faster as you can.

Not only that, but its unique passive called Insanity lets you survive the game even more by granting you more life steal while your health is below.

Once you have this item you can ready to begin to dominate as Hanabi (but of course your skills are still in test here if your enemies know their heroes as well).

Gives a little bit of everything for Hanabi, +20 movement speed to be more effective in re-positioning and being mobile to escape hard ganks.

Attack speed and by +25%, this can let you can hit enemies faster and the critical strike chance by 20%.

These stats given can let you kill off enemies faster but however there are still more things that this item has to offer. It has two unique effects, first is Typhoon that lets you deal magic damage to 3 enemies after some basic attacks, this work in unison with the second passive, Activate, which you will have 5% more movement speed while Typhoon is up.

With this item, you can be sure to kill off an enemy fast by critical hits and attack speed but you can also avoid silly deaths with your mobility.

Another all-around item for ADCs, +30 physical attack, +40% attack speed which is huge to obliterate enemies that fight you and a +10% critical strike chance to deal more damage and shock the enemies with your damage output.

You will also have a unique passive, Frenzy which lets you increase your attack speed by 25% and have a higher critical rate by 5%.

This item will solidify your position in the middle to late game with your attack speed and stacking critical strike chance.

Choose one for the last item
These are situational items pick one if your team needs it or you need it.

If you think you can finish and carry the game from this point on forward then buy the Blade of Despair with tons of physical attack, attack speed and critical chance, you will be an unstoppable killing machine in clashes and your kit lets you survive longer with your passive and first skill so if you want to win, and win now. Take this.

We all hate those enemy heroes that always heal those who are almost down and they just return the favor in you, resulting in unexpected deaths, well Deadly Blade has that solution, it is a counter for those heals, making it less effective or not working at all, this item is to finish off enemies before their healers get to them.

If you are a clumsy and careless player or if the team needs you more than ever to survive in team fights, take this item.

With its bonuses and a passive that lets you resurrect after you die, this is a necessity to survive in long late games which you need to finish as much as possible to avoid them mounting a comeback.

A standard build may be enough for Hanabi, however this is not always the case but remember that your skills can let you live through the fight as long as you don’t get slowed, stunned, rooted, or any other CC that may lead you to your death.

Hanabi is still not released so keep updated to know if she is up so you can play her! For more information about Hanabi and the newest released heroes in Mobile Legends, stay tuned!
Next Post Prev Post