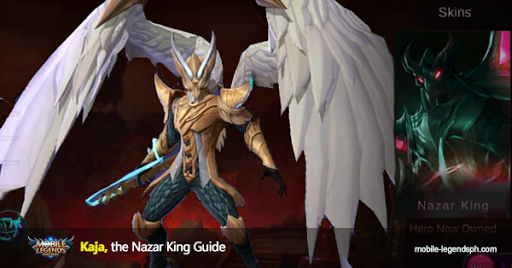 It’s been a long time since Mobile Legends has released this kind of champion, forgive me if we have missed something but for a tank that can play the role of support is a must for every MOBA game.

An alien-esque style that has wings, golden armor and what appears to be a blade.

However, his specialty relies on his ability to initiate a team fight or charge through the enemy lines causing a battle to happen.

That’s what Kaja does in the game, however, we do not know how it will be easy or hard he will be but we can always check the stat bar at the left side to see his strengths and weaknesses.

According to his stat bar, it seems that he will be a durable hero on the battlefield. This makes sense since he is an initiator and what is an initiator if it’s a softie that can be poked by the enemies so Kaja needs to be durable, he has mediocre stats for an offensive rating but at least it is not lower compare to others.

Passive Skill - Eye of the Storm

Kaja gains 40% movement speed when attacked by enemy heroes. This movement speed boost decays over 1 seconds and can be triggered once every 5 seconds.

Cooldown: 8.7 Mana Cost: 40 AoE
Kaja releases a ring of electricity that rapidly expands until reaching its limit and the returns to his body. Units hit by the ring take 230 (+x) magic damage per second and are briefly slowed by 30%. When the ring hits an enemy unit, Kaja fires a lightning bolt, dealing 220 magic damage per second to the nearest enemy target. This damage gradually increases over time.

Cooldown 10.7 Mana Cost: 32 Blink Shield
Charges in a specified direction, Dealing 260 (+x) magic damage to enemies in his path. When encountering a friendly hero along the way, this dash will be immediately interrupted and the encountered teammate will be granted a shield. Can be used again within 10% seconds to move again in a specified direction.

He will also rely on his abilities to take part of the action so with the aggressor type of play as the initiator and the skills he needs. He will need to be build tank or support the enemy carry in order to win the game.

That’s all we have for now about the newest hero, Kaja. For more information, stay tuned for more Mobile Legends news!
Next Post Prev Post