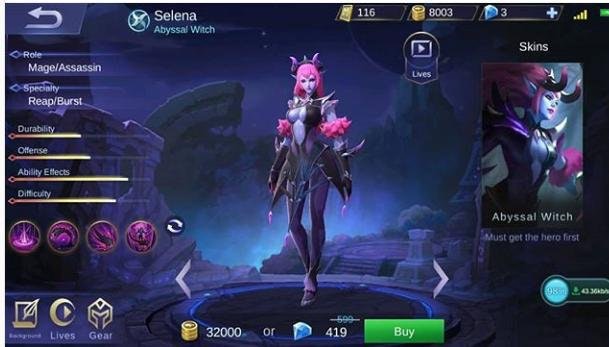 She will be a Mage – Assassin Archetype where she will draw her assassination skills with the power of her abilities, we will now feature Selena, the Abyssal Witch.

If you want to know more, keep on reading to find out!

Selena, like what we said earlier will be a mage and assassin altogether, she will have a mediocre durability since the two types.

She is infused in has a weak durability and could be squishy if there are no health items built in her kit.

Her offense will also be at a breakeven area since assassins should have a high damage output but since she relies on her spells and abilities, that’s where her power will lie, since the meter the shows her effect ability has the highest mark in her bar.

1st Skill: Abyssal Trap
Summons an Abyssal Devil to lurk in the designated locations. When approached by an enemy until it will attach itself to the enemy, then deal magic damage to the enemy and surrounding enemy targets while slowing them.

Devils can also be attached to Selena's body, but she will not take damage or be slowed by them. Up to 3 devils can exist at the same time.

2nd Skill: Abyssal Arrow
Channels the power of the abyss into magic arrows then fires them in the specified direction, Enemies hit are stunned and take magical damage.

Stun duration and damage increase the further the arrows fliy. Abyssal Traps hit along the way wil be absorbed and the trap's effect will be applied to the target when hit.

1st Skill: Soul Eater
Uses the power of the abyss to strengthen both clawscausing the next basic atack to deal an additiona magical damage, whie granting a damage absorbing shield.

2nd Skill: Garotte
Charges in the specified direction, dealing magical damage to enemies along the way. If this damage triggers the Abyssal Mark effect, its cooldown wil reset immediately.

Ultimae skill: Blessing of the Moon God
Slena calls upon the power of the Moon God to rid her body of the Abyss, increasing movement speed for a short time and restoring Elven skills.

Passive: Symbiosis
The power bestowed upon her by the Moon God and the Abyss allows Slena to switch freey between her two forms. Skills used in her Elven form will attach Abyssal Marks to her enemies, and skills used Abyssal form wi consume theses marks to dea bonus magical damage.

Overall, her difficulty will be a little bit high and players might need to learn a lot more before mastering her.

This is understandable as the standard assassin kit should be a high damage output and not focus on the abilities that she can cast and a standard mage kit should always be at the back line dealing magical damage unless it is a mage tank that it would be understandable.

Her specialties would focus on the reap and burst damage since she is an assassin a great burst would be necessary to take down the weak enemy carries and those who have fallen into low health.

That’s all that we got for Selena right now. Interested for more?

Then stay tuned for more information about Selena and the game, Mobile Legends
Next Post Prev Post